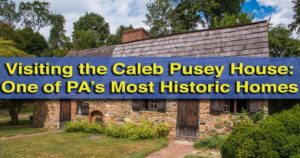 A residential area in the southeastern corner of Pennsylvania isn’t exactly where you’d expect to find a remarkable structure, yet the small borough of Upland in Delaware County is home to one of the state’s most historic homes: the Caleb Pusey House.

Caleb Pusey was an English lastmaker (shoe-model maker) who became part of the company with William Penn that set up the colony of Pennsylvania. While Pusey had no experience, he was tasked with running a mill in the new colony.

The mill that Pusey was to run was built and tested before being placed on William Penn’s ship, “Welcome,” and shipped to the New World along with Pusey and his family. The mill was to be set up a few miles inland along the Chester Creek. The location that was chosen was as far up the creek as a boat could navigate and just downstream of the creek’s first fording area.

Since Pusey and his family arrived late in the year, they hunkered down in a small underground cellar dug next to where they would build their English-style cottage once warmer air returned in 1683. Within a few years, they added on an extension to the home, giving the family more living space and enclosing their well and the backside of the fireplace.

Over the next few decades, Pusey ran Chester Mills, which was both a grist and saw mill. The mill had to be rebuilt twice after floods destroyed it. During his time as the mill owner, he also served in several local government jobs including as a Pennsylvania Assemblyman and as the county treasurer. In 1718, Pusey and his wife left the home, moving closer to family.

Remarkably, as the community built up around the home, little changed in the home, which was occupied almost continuously until 1959. While more modern walls were put up and a wall was added around the home, plumbing and electricity were never added to the home. When the home was taken over by The Friends of the Caleb Pusey House in 1963, structural work was needed, but nearly the entire structure could be saved. In fact, despite being over 300 years old, the home is 85% original, which is quite remarkable.

The Caleb Pusey House has been open to the public since the mid-1960s and offers a unique look at what life was like for the first wave of English settlers to land in what would become Pennsylvania. The house is also the last building in the New World were it can be documented that William Penn visited, giving it a one-of-a-kind connection to the founder of the colony.

Tours of the home allow visitors to see inside of this fully-restored house. While only one piece of furniture in the home belonged to the Pusey family, the rest of the furniture is period furniture from Great Britain, which gives it an authentic feel. The dresser in the home’s second room was owned by Pusey. In fact, it still has his name clearly carved on it, along with the year 1717.

Next to the home is a schoolhouse built in the year 1849. The school was built for the children of those that worked in the mill that was in the area. The schoolhouse now contains a small museum and gift shop. The museum features items related to the history of the area, as well as items found during archeological digs, some of which date back to the 17th century. There are even several original documents related to the Pusey family’s life in the region.

Also surrounding the mill are several other historic buildings that date from the 18th and 19th century. However, at this time, these buildings are not open to the public.

There is no question in my mind that the Caleb Pusey House is one of the most remarkable homes in Pennsylvania. Not only is it one of the few buildings from the 17th century that has remained largely untouched, but it is also the only building in PA with a documented visit by William Penn. A visit to this Delaware County home offers a great chance to learn about the settlement of Pennsylvania and what life was like in the beginning days of William Penn’s colony.

Note: My visit to the Caleb Pusey House was hosted by the site. However, the opinions expressed are my own.

See map below for other area attractions.
433 shares 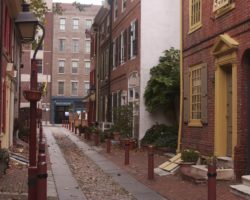 5 thoughts on “Visiting the Caleb Pusey House: One of PA’s Most Historic Homes”