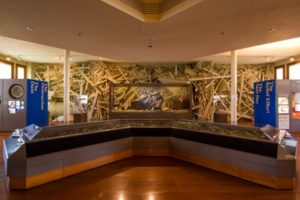 On May 31, 1889, a devastating flood struck Johnstown, Pennsylvania, and the surrounding countryside. Caused by the bursting of the South Fork Dam 14 miles above the city, a wall of water and debris struck the city. When the waters receded, more than 2,200 people were dead and more than $450 million dollars (in inflation adjusted dollars) of damage had been done to the area.

With only a few buildings still standing in downtown Johnstown, the city began to rebuild shortly after the flood. Pittsburgh tycoon, Andrew Carnegie wanted to help the community, and donated money to build a Carnegie Library in the town, one of the many he financed in western Pennsylvania.

The Carnegie Library opened in February 1892. The building consisted of three floors. The first floor was meeting rooms for local organizations. The second floor housed a library which offered free English lessons to the many immigrants that were flocking to Johnstown’s steel mills. The museum’s third floor was home to a state-of-the-art gymnasium, complete with a basketball court and a running track.

The building would later be damaged in another devastating flood that hit the city in 1936 and function as the community’s library until 1971. Just two years later, the Johnstown Flood Museum would open in the building to tell the story of that tragic day in May 1889 and to remember those lost in the flood.

The museum’s first floor features a variety of displays that tell about the flood. The centerpiece of the room is a large, relief map diorama that utilizes a variety of colored lights, narration, and sound effects to demonstrate how the flood moved down the Little Conemaugh River and into downtown Johnstown.

Surrounding the map is a variety of displays related to the flood. These displays include both regular and 3D photos of the area after the flood, items that were found in town after the flood, and even medical records of flood victims. On the wall is a list of known victims of the flood. While it is likely not a complete record of those killed, it’s still very sobering to see such a long list.

The displays of the Johnstown Flood Museum continue outside to the only original Oklahoma House in Johnstown. Called such because they were destined for Oklahoma, these pre-fabricated homes were made in Chicago and sent to Johnstown as temporary housing for victims.

This particular house was discovered on a back road in Johnstown and was moved to the museum. Today, it has been restored to its original condition and showcases what life was like for the flood’s survivors.

The museum’s second floor features more photos of town prior to the flood, as well as remnants of the building’s days as a library. However, the main focus of the floor is a movie theater which shows a 25-minute film about the flood. Unlike the video at the Johnstown Flood National Memorial which focuses more on the emotional side of the flood, this film is more fact based and discusses the history of the city before, during, and after the flood of 1889.

The third floor of the museum has little to do with the flood, but is still worth seeing. This floor is largely unchanged from its original use as a gymnasium. Visitors can still see the old basketball court and look up at both the running track and the incredible craftsmanship on display. There is also a large organ that isn’t original to the building, but is still historical.

If you have the chance, visit both, and also take a few minutes to stop by Grandview Cemetery. Located on a hillside near the downtown core of the city, this cemetery is the final resting place of the 777 flood victims whose bodies were never identified.

The long rows of white gravestones are reminiscent of a military cemetery, and it’s a somber reminder of the human cost of this devastating flood. Nearby, graves of other victims can be seen. Simply look for tombstones with a death date of May 31, 1889, to discover these graves.

Note: My visit to the Johnstown Flood Museum was hosted by the site. However, the opinions expressed are my own. 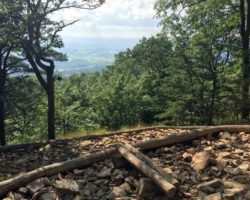