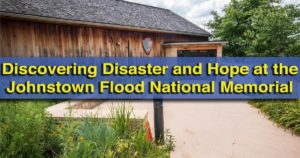 The Johnstown Flood National Memorial tells the story of the devastating Johnstown Flood of May 31, 1889. This flood, which was created by the breaking of the South Fork Dam 14 miles upstream along the Little Conemaugh River, resulted in the near destruction of Johnstown, and the deaths of approximately 2,200 people.

The victims of this disaster are memorialized at the Johnstown Flood National Memorial, which occupies the land that once belonged to the South Fork Fishing and Hunting Club. This club’s membership ranks included some of the most illustrious men of the time, including Andrew Carnegie, Henry Clay Frick, and future Attorney General and Secretary of State, Philander C. Knox.

The club had taken over an old reservoir that once supplied water to the canals of the Pennsylvania Main Line. The dam had already failed once, without any loss of life, before it was purchased to create a lake for the club.

When it came time for the club to repair the dam, they failed to consult any engineers and created a dam that was a ticking time bomb for the citizens of the valley below. Somewhat miraculously, the dam held for roughly six years before finally breaking in May 1889.

When the dam broke, 20 million tons of water tore through the valley, obliterating every town that it passed through, causing roughly $17 million in damage (approximately $500 million today) and resulting in at least 2,200 deaths. Those who died ranged from young babies to the elderly and over 750 were never identified. Those who were never identified were buried in the Unknown Plot at Grandview Cemetery in Johnstown.

Today, the Johnstown Flood National Memorial tells the story of those that died and were affected by the flood, while also preserving the buildings that once belonged to the South Fork Hunting and Fishing Club.

The memorial is run by the National Park Service and is located in a modern building just above the remains of the South Fork Dam. The visitor center features a small museum, gift shop, and theater that shows a 30-minute film about the flood every hour.

To be honest, the film is a bit hokey in places but does a great job overall in recreating what the flood was like and telling the story of what happened. Likewise, the museum, while small, offers a nice bit of information about the flood and you can even hear a survivor’s story during your visit.

In my opinion, the highlight of the Johnstown Flood National Memorial is the structures that still stand from the days of the South Fork Hunting and Fishing Club. When the dam broke in 1889, it was never rebuilt, resulting in the lake bed quickly becoming overgrown in parts and the small community of Saint Michael, Pennsylvania, occupying the rest of the former lake bed.

Visitors are welcome to drive around the area and look at the overgrown remains of the South Fork Dam, the summer homes that were once used by members of the club, and the South Fork Hunting and Fishing Clubhouse. However, if you can, visit during the summer and take a guided tour with a park ranger.

These 1-hour bus tours take visitors to these same sites, but with a park ranger offering history and insight into the importance of the locations. Visitors can even get out and explore the interior of the South Fork Hunting and Fishing Clubhouse, though there is little inside to see. However, the on-site history makes the tour a great learning opportunity, and the tours are included in the cost of admission, making them a very good value.

Looking for more spots to visit nearby? Check out the Lost Children of the Alleghenies Monument, the Johnstown Inclined Plane, and Hinckston Run Falls.

Note: My visit to the Johnstown Flood National Memorial was hosted by the site. However, the opinions expressed are my own. 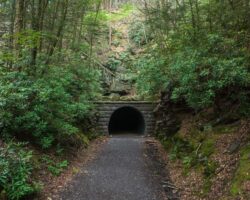 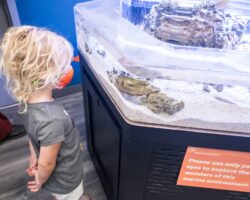 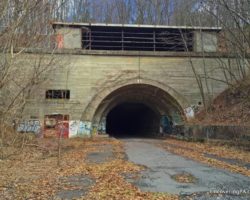