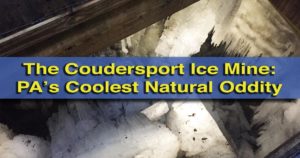 Tucked away in the rolling hills of Potter County is one of the oddest natural wonders in Pennsylvania: The Coudersport Ice Mine.

The ice mine was discovered by prospectors searching for silver in the mountains outside of Coudersport. After removing the moss along a promising hillside, the men were shocked to discover a layer of ice on this hot summer day.

Continuing to dig, they opened a shaft that was roughly 10×12 feet and had a depth of 25 feet. Inside, they found not only large pieces of ice, but also human remains, a petrified fish, and fossils.

No one knows exactly what causes the ice to form in this narrow area.

The mine is located on a hillside, shielded from the sun and wind. Ice begins to form in April and continues to build up as the weather warms. Then, starting in September, the ice begins to melt, with only a residual amount remaining during the winter months.

Many theories have been proposed over the years, but the most widely accepted is that cold air from the mountain flows out through the crevices around the ice mine as the air warms. This creates a very cold spot where ice can form during the summer months.

The Coudersport Ice Mine has been attracting tourists since it was found, bringing things to do in Coudersport, PA. Contrary to the name, the area was never mined for ice, though some locals did use it to store food from time to time. However, despite the unique nature of the site, it was closed to visitors in the late 1980s.

Fortunately, the Coudersport Ice Mine was purchased by new owners and opened again to the public in 2014.

Today, visitors can learn the story of this curious natural feature and peer down into the ice mine from above.

Visits start in the visitor center, which features a variety of items related to the mine and the surrounding area. If you want a t-shirt that says “Potter County” on it, this is one of the few places you can pick one up.

The ice mine is located less than 25 feet from the ticket counter, which makes this a very easily accessible site for anyone to see.

The mine itself is located behind a small building that serves as a viewing platform.

Guides lead you into this single room, which is significantly colder than the surrounding area. In here, there is little to see but a hole in the ground filled with ice.

While you, unfortunately, can’t go into the mine itself, the viewing platform and railings offer a variety of comfortable vantage points with which you can peer into the ice mine below.

During my visit on a hot and humid July afternoon, the buildup of ice was quite impressive. Large columns of ice were flanked by small icicles, and the entire bottom was covered with a thick layer of ice.

The very cool air coming out of the mine was quite refreshing on a hot day but was shockingly cold.

I’ve been to a lot of natural curiosities in Pennsylvania, and some unnatural ones like PA’s only geyser, but the Coudersport Ice Mine has to rank as one of the strangest. While it’s not the only natural ice mine in the world, it is the largest east of the Mississippi River and well-worth a stop if traveling along Route 6 in Potter County, Pennsylvania.

Note: My visit to the Coudersport Ice Mine was hosted by the site, but the opinions expressed are my own.

Explore other reasons why you should visit Potter County, or hit up the nearby Austin Dam, Triple Continental Divide, Cherry Springs State Park, and Pennsylvania Lumber Museum if you’re already convinced.

See map below for other area attractions.
62.6K shares 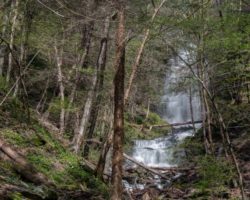 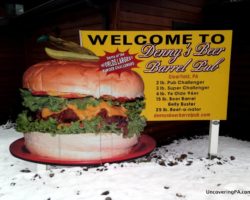 10 thoughts on “The Coudersport Ice Mine: Pennsylvania’s Coolest Natural Oddity”