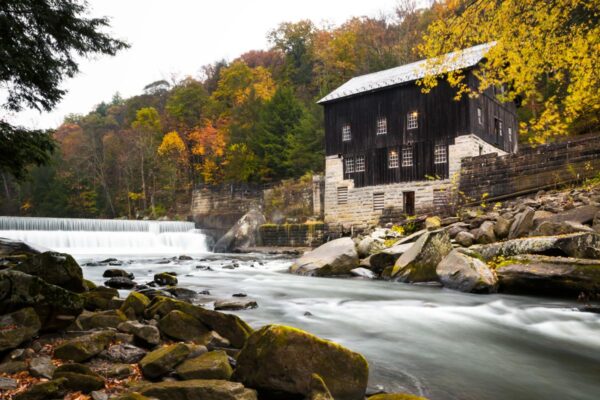 The Netflix film, “The Pale Blue Eye”, starring actor Christian Bale was shot primarily in the Pittsburgh area, including some very recognizable spots if you’re familiar with the region.

In the film, western Pennsylvania stands in for West Point and the Hudson Valley circa 1830 as Augustus Landor (played by Bale), investigates a series of crimes on the campus. He is assisted by a young Edgar Allan Poe.

Even in the trailer for the film, which you can see above, there are several spots in PA that are instantly recognizable, including McConnells Mill State Park and Westminster College.

Below, I share those and a few others that you can visit on your own if you want to see the filming locations for “The Pale Blue Eye” in Pennsylvania. (Note that this article contains no spoilers that weren’t reported prior to the movie’s premier.)

The Compass Inn Museum in Westmoreland County, PA was the first filming location used for the movie, with filming for the entire movie starting there on November 29, 2021.

The Compass Inn Museum’s blacksmith shop stands in for an 1830 tavern, which is a perfect fit because the Compass Inn was at its peak as a stagecoach stop and tavern in the 1830s.

Also recognizable in at least one scene in the tavern are Pennsylvania Senator John Fetterman and his wife Gisele, who were extras during at least one scene shot here. Bale said of Fetterman, “John’s got this fantastic face, hulking figure…That’s a face that fits the 1830s.”

Visitors looking to visit this filming location can tour the museum, including the blacksmith shop, to learn what life was like in the early 1800s, and how taverns like this one helped in the settlement of both the region and the western United States.

When I first watch the preview for “The Pale Blue Eye”, McConnells Mill State Park in Lawrence County stood out to me instantly from my many visits to this scenic area.

The park actually features quite prominently in the trailer with at least 4 of the scenes being shot there (and likely more). This includes the historic mill in the park, which is the most recognizable of the features.

This mill was constructed in 1868, making it a bit too modern for the film, but it still is a fitting setting and looks quite striking as it towers above Slippery Rock Creek. It also sits adjacent to the beautiful McConnell’s Mill Covered Bridge, one of my favorite covered bridges in PA.

There is another shot in the trailer that looks like it may be from just below Kildoo Falls, but it’s a little hard to tell for sure.

McConnells Mill is, in my opinion, one of the most beautiful state parks in Pennsylvania, and there are miles of hiking trails and many great waterfalls for visitors to enjoy while looking for the filming locations for “The Pale Blue Eye”.

Westminster College in New Wilmington is another filming location for “The Pale Blue Eye” in Pennsylvania.

This Lawrence County liberal arts school stands in for West Point because of its Collegiate Gothic-style buildings, even though the school didn’t open until more than 20 years after the film is set.

The college’s Quad, which consists of Old Main, Browne and Ferguson Halls, and the McGill Library, is featured prominently in the film and can even be seen in the trailer above.

While this isn’t an official tourist attraction, visitors can certainly visit the campus and walk through these beautiful grounds.

Located just a few miles from McConnell’s Mill State Park, Moraine State Park is another filming location from the movie.

Interestingly, Lake Arthur in the park was filmed in such a way that it stood in for the Hudson River at various points throughout the film. While using a lake for this purpose seems strange, the forested shores of a lake are a nice match for what the Hudson Valley looked like 200 years ago.

Visitors today can enjoy Moraine State Park’s lake, many miles of hiking and biking trails, and, in the summertime, several great beaches.

Penguin Court (as well as the adjacent Thomas Road Farm) is an 1,100-acre section of preserved land in Westmoreland County that is owned by the Brandywine Conservancy. The area got its unusual name due to the 10 penguins that used to roam the land when this was private property.

Penguin Court’s land is mostly forest and meadow, which provide a variety of locations for the outdoor shots used in the film. The property is also home to a historic barn, remnants of a mansion, and a very large greenhouse and conservancy.

Penguin Court isn’t open to the public on a daily basis, but visitors are allowed to check out the area during regularly-occurring events.

Old Economy Village is located in Beaver County and is another location used in the filming of “The Pale Blue Eye”.

This village was constructed beginning in the 1820s and was the home of the Harmony Society, a religious sect that has since died out (in no small part due to their vow of celibacy).  Several of their historic buildings, including the Feast Hall and the Granary, are said to have been used to shoot various scenes in the film.

Visitors wanting to explore this site can take tours of the village, which are offered from May through December.

Allegheny Cemetery is located in the Lawrenceville neighborhood in Pittsburgh and is one of Pennsylvania’s most historic cemeteries.

The cemetery opened in 1844 and is one of the oldest rural cemeteries in the country. The cemetery is 300 acres in size and is said to be the final resting place of more than 100,000 people, including many famous Pittsburghers and even soldiers who died in the French and Indian War (who were reinterred here).

While the cemetery is a few decades more recent than the film’s timeline, it’s still a beautiful and historic spot, and it’s definitely not a stretch for it to stand in for scenes in a movie set in the early 19th century.

Today, visitors can drive or walk through the cemetery grounds to both enjoy the beautiful setting and to pay their respects to the people buried there. Some of the most notable graves can be found on this map.

Have you seen the film or been to any of these filming locations for “The Pale Blue Eye” in PA? Let us know in the comments below.

Looking for more things to do near Pittsburgh? Check out Pittsburgh’s best breweries, the Heinz History Center, and Historic Hanna’s Town.