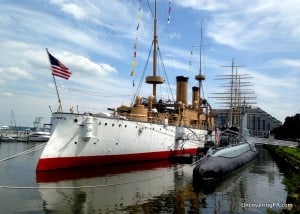 Did you know that up until the early-1800s, Philadelphia had the largest shipping port in America? This isn’t entirely surprising when you consider that Philadelphia was also once the country’s capital and largest city. However, given that Philadelphia doesn’t sit on the ocean, I still found that fact quite surprising.

A ticket to the Independence Seaport Museum grants you access to both the museum and the two ships docked a short distance away next to Spruce Street Harbor Park. The ships themselves are quite fascinating, but I’ll get to them a bit later.

The Independence Seaport Museum features a great collection of information about the shipping history of Philadelphia.

The museum offers visitors a great look at the history of the port, including information on immigrants who came to the country through Philadelphia, the different cargo that has come through the port over the last 400+ years, and the history of naval shipbuilding in the area.

In fact, they even have the restored bridge of the USS Lawrence on display. Having been built in Camden, just across the Delaware River from the city, the ship is a great piece of Philadelphia Naval history.

Upstairs, there are several fun activities that interactively teach how boats move through the water. Back downstairs, don’t miss the on-site boat shop that builds and repairs smaller boats for a variety of customers. Talking with the workers gives you a great appreciation for the work that goes into making a boat.

What I liked most about the museum was that they didn’t shy away from the port’s less savory history. There is a section that discusses the many different shipwrecks that occurred in the Delaware River. While the museum doesn’t shy away from discussing the carnage from the wreck, they balance it with information about how ship safety and rescue tactics have evolved over the years.

Another darker chapter that the museum talks about is slavery. I was surprised to learn that Philadelphia was the largest entry point for slaves into the United States for many years, with the first slave ship visiting the city in 1684.

For the next 80 years, thousands of slaves were shipped to Philadelphia and sold in the heart of downtown Philly. (Note: If you are interested in seeing where the slave block once stood, head to the corner of Market and Front street to see the historical marker, the only evidence of the cruel history that happened on the spot).

Once finishing the museum, definitely take the short walk over to the two docked ships that you can tour with your ticket.

The Submarine Becuna was in service for 25 years, from 1944 to 1969, and saw service during World War 2 and during the Cold War. When visiting you can actually walk through the submarine and see what life was like for those that lived on the boat. I found the submarine to be quite fascinating and the many signs around made it easy to understand what each area was for.

It’s worth noting, however, that the submarine is quite cramped. The hallways are very narrow, making it impossible to pass someone in front of you going too slowly (or forcing you to pick up the pace to keep from holding up the line).

Also, the portholes that you have to squeeze through on several occasions can be quite tricky. I’m not the smallest guy in the world, and I had a bit of difficulty getting through them, especially at first. If you aren’t nimble, it might be best to forgo the Becuna, unfortunately.

After visiting the Becuna, make your way topside and check out the Olympia. Built in 1892, the Olympia is the oldest steel warship still afloat in the world. The ship has a significant place in history as the flagship of Commodore George Dewey in the Battle of Manila Bay, the first major battle of the Spanish-American War.

It was the Olympia that fired the first shot of this decisive battle, and the spot where Dewey stood when giving the order to fire is marked on the bridge with two brass footprints.

Overall, I really enjoyed my visit to the Independence Seaport Museum. However, if I’m being honest, it was the ships that really made it enjoyable. In my opinion, while the museum is well done and informative, it covers so much information that it can be hard to really appreciate what’s there.

However, the opportunity to tour the ships is more than worth the cost of admission and makes this a fantastic place to go when visiting Philadelphia.

Note: My visit to the Independence Seaport Museum was hosted by Visit Philly. However, the opinions expressed in the article are my own.

Want to explore more of PA’s transportation history? Check out the Erie Maritime Museum, the Railroad Museum of Pennsylvania, and the Mid-Atlantic Air Museum.

See map below for other area attractions.
436 shares 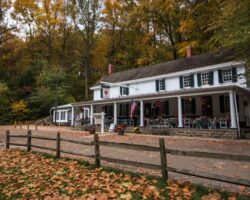