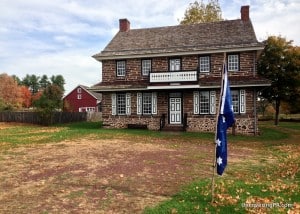 Because George Washington spent so much of his public career in Pennsylvania, there are many different sites around the state that focus on their connection to our first President and the leader of the Continental Army during the Revolutionary War. Some, like Fort Necessity in Fayette County or Independence Hall in downtown Philadelphia have a very strong and storied connection to Washington, while others have a little bit more tenuous connection. One of those places is the Peter Wentz Farmstead in Montgomery County.

The land was settled by Peter Wentz and his family in 1744, but it wasn’t until 1758 that the large, Georgian-style stone house was completed. The home has a very Germanic look from the outside, but also reflects the family’s farming wealth.

In October 1777, however, the war came directly to the Wentz Farmstead as General Washington led his troops onto the grounds and Washington took up residence in the home. It isn’t exactly known why the Wentz house was chosen by Washington, but, as with all of the homes he stayed in, Washington received permission from Wentz and paid him for his troubles.

Early October 1777 was a difficult time for the Continental Army. Having recently been beaten at the Battle of Brandywine and the Battle of Paoli in September, and having lost control of the US capital city of Philadelphia that same month, Washington was likely feeling very downhearted. However, he was working on a plan to drive the British Army from Philadelphia so that his troops could retake the city.

While at the home, Washington likely knew that he wouldn’t be able to retake Philadelphia from the British before the winter, so he may have already been thinking about where his troops would stay during the winter of 1777-1778. In fact, less than two months after leaving the Wentz farmstead, Washington and his troops set up camp nearby at an area known as Valley Forge.

However, Washington’s time at the Peter Wentz Farmstead wasn’t without cheer. In fact, it was while he was at the home, on October 18, that Washington and his men celebrated British General Burgoyne’s surrender to General Gates at Saratoga, New York.

At that time, recognizing the home’s historical significance, it was purchased by the County of Montgomery and opened to the public a few years later.

Today, the farmstead is open for public tours, and the grounds still continue to be a working farm that allows visitors to better understand what life was like in the 18th century. The home itself has been restored to its former glory, and the many outbuildings around it have been reconstructed.

From the outside, the home offers a very unique blend of early-American farmhouse with Germanic accents. However, the slightly curious outside is nothing compared to the frankly odd interior paint. I’ve been inside many homes from the 18th and 19th century, and most have either white walls or colorfully painted walls to help brighten the home. However, the Peter Wentz Farmstead has polka dots covering nearly every wall inside the home. That’s right…polka dots.

This odd paint choice, which is original to the home, contrasts greatly with the 18th-century furniture inside the farmstead (No photos are allowed inside the home, which is why there are no photos). Unfortunately, due to a lack of records, little is known about what furniture was in the home in October 1777 or even which rooms Washington might have used as an office and sleeping chambers. Because of this, none of the furniture is original to the property.

Ultimately, the Peter Wentz Farmstead probably isn’t worth the drive from downtown Philadelphia to Montgomery County just for the home’s history. However, if you are in the area looking at some of the other Revolutionary War sites in Montgomery County, or you are really interested in unique architectural history, the Peter Wentz Farmstead is certainly worth a quick visit.

See map below for other area attractions.
537 shares 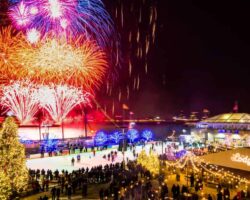 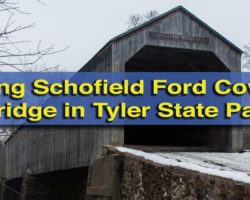 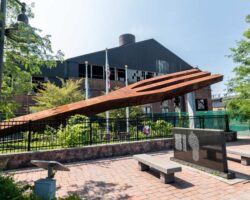