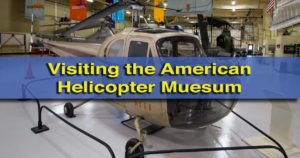 Pennsylvania is home to many great museums related to the region’s transportation history. Whether you want to know about automobiles, airplanes, trains, or trolleys, there are several great museums about each that tell the story of their history.

However, if you want to learn about helicopters, there is really only one place to go: the American Helicopter Museum in West Chester, PA.

The American Helicopter Museum focuses on rotary-winged aircraft. The first aircraft of this type, which looked more like a modified airplane than today’s helicopters, took off from a field in nearby Bryn Athyn, Pennsylvania, in 1928. From that point on, the Delaware Valley was an important hub in the development of helicopters, gyrocopters, and other aircraft of this type.

In 1996, the American Helicopter Museum was opened to the public to commemorate the region’s contributions to the development of rotary-winged aircraft. Located in an old hangar at the Brandywine Airport, the museum features dozens of historic helicopters and gyrocopters dating back to 1946.

While the museum does not offer helicopter rides on a day-to-day basis, the museum still has plenty of interesting things to see and enough interactive elements to keep the entire family entertained.

There are over two dozen helicopters and other rotary-winged aircraft inside the hangar at the American Helicopter Museum. The exhibits on display include both military and civilian aircraft, but the majority are old military helicopters.

Not knowing much about helicopters and never having spent much time near them, I enjoyed the opportunity to see these helicopters up close. Informational signs in front of each helicopter offer descriptions of the models on display, and video screens located in front of some offer clips of the model in flight.

While tours of the museum are self-guided, volunteers are available throughout the space to answer any questions that you have during your visit. Many of these volunteers have experience flying and working on rotary-winged aircraft, making them a wealth of great information about the machines.

I especially enjoyed the museum’s mockup of a Boeing HH-47 Combat Search and Rescue Helicopter. While identical to the real helicopter in many ways, this mock-up is missing several key components that would allow it to actually fly. Nevertheless, the interior looks complete, and visitors are allowed to step inside and see what it’s like in this beautiful machine.

Another highlight of the museum was the Bell H-13 Helicopter. Best known as the helicopter from the opening scene of the TV show M.A.S.H., this Korean War-era helicopter is sat amongst a diorama telling about the advent of medevac operations during the war.

Comparing the Bell helicopter to those that both came before it and came after it, it’s fascinating to look at how the technology of rotary-winged aircraft have changed over the years, and how these changes have affected the design and capabilities of helicopters.

In addition to the helicopters and gyrocopters on display, the museum is also home to memorabilia related to helicopters. Items such as helicopter toys and models are on display along the museum’s walls. There is also a very nice display about the history of rotary-winged aircraft in the Delaware Valley. Also inside the museum is a theater that shows historic footage of helicopters, a research library, and a great helicopter-themed kids play area.

Outside the American Helicopter Museum are six historic helicopters. Five of these sit in front of the building and offer a nice addition to any visit, or somewhere worth seeing if you come on a day the museum is closed. Behind the museum, accessible only from the inside, is the only Osprey V-22 in the world helicopter on display at a museum. This modern aircraft has only been in service since 2007, so this display offers museum visitors a chance to get a close look one of the world’s most modern helicopters.

Overall, the American Helicopter Museum in West Chester, PA, is a fascinating place to visit. Not only is it the only museum in Pennsylvania dedicated to rotary-winged aircraft, but it also offers a great chance for anyone interested in the history of transportation or machinery to see them up close.

The museum is definitely a great place to visit while spending time in Chester County, PA.

Note: My visit to the American Helicopter Museum was hosted by the site. However, the opinions expressed are my own.

Looking for more to do in the area? Check out the Antique Ice Tool Museum, the Chester County Historical Society Museum, and the covered bridges of Chester County. 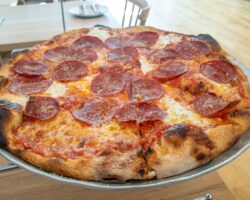