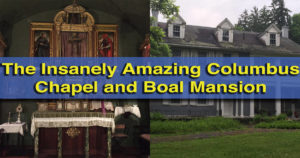 Disclosure: This article may contain affiliate links. We will make a small commission from these links if you order something at no additional cost to you.
Every once in a while, I visit somewhere that’s so amazingly special that I can’t wait to share it with you: The Columbus Chapel and Boal Mansion Museum in Centre County, Pennsylvania, is one of those places.

Pulling up to this old home, I didn’t exactly know what to expect. My research had yielded connections to Christopher Columbus, Napoleon, and even Saint Bernard (of canine fame), but was it all a hoax? Surely there couldn’t be connections to those historic names in this small Pennsylvania borough.

However, what I uncovered was one of the most amazing sites in all of Pennsylvania, and I was honored to have been invited to visit such an amazing place.

The museum’s property includes a large mansion, several outbuildings, and a small, rustic chapel. The home was started as a basic log home, built in the first decade of the 19th century by one of the area’s first residents, David Boal. All told, eight generations of Boals lived in the home.

David Boal’s son, George Boal, was very influential in the area, serving as a Representative in the Pennsylvania House and the founder of the Centre County Agricultural Society. His lobbying in Harrisburg was part of the reason the state put the Farmer’s School (now Penn State) in nearby State College in 1855.

However, it was George’s grandson, Theodore Davis Boal, who had the most effect on the home you see today and the amazing items within.

Boal was trained as an architect and designed several buildings in Denver, Colorado, before traveling to Paris, France, to continue his studies. While there, he married Mathilde Dolorès Denis de Lagarde, a French aristocrat related to Christopher Columbus. When his wife’s aunt died, the Columbus family castle in Asturias, Spain, was inherited by the Boal family.

In a move that would certainly be blocked by the Spanish government in the 21st century, Boal built an exact replica of the castle’s chapel and had the entire contents boxed up and shipped to Boalsburg, Pennsylvania, in 1909

The stone building that houses the chapel sits on a small knoll about a hundred yards from the mansion. While certainly charming, its relatively nondescript exterior conceals the shockingly beautiful interior.

Walking through the doorway was like walking through a portal into Old World Europe. The ornate chapel was unlike anything I had ever seen on this side of the Atlantic, and it was immediately evident that great care had been taken to present the chapel just as it had been in Spain.

Once I was able to pick my jaw up off the floor, museum director Bob Cameron began explaining the contents of the room to me. It seemed like each item he pointed out was more remarkable than the last.

Items ranged from beautiful 15th-century paintings to the chapel’s original wooden door. On the wall hung the Columbus family tree (including illegitimate branches denoted in brown) and the Columbus family coat of arms that dated back hundreds of years. The chapel also contained Columbus’ own Admirals desk and several religious statues that may have been on the ship during his voyages.

The chapel’s confessionals had been converted by the family to hold nearly 500 years of family correspondence. Tens of thousands of pages of perfectly preserved documents sit on the cabinet’s walls. I was fortunate enough to get to view a handful of these ancient pages and was amazed at the beauty and readability of these ancient pages.

However, a small silver cross atop the altar might be the most amazing piece in the entire chapel. If you look closely, you’ll notice two small pieces of wood inside. According to the manuscript on the wall certified by a Spanish bishop, these wooden pieces are from the “True Cross of Jesus” and were brought back during the Crusades.

Whether you believe the pieces are authentic or not, to have a relic of this magnitude and something brought back to Europe during the Crusades in the middle of Pennsylvania is truly remarkable.

Truthfully, I didn’t really want to leave the Columbus Chapel. I could have probably stayed there for hours just marveling at the centuries-old items housed there and connected to one of the most influential historical figures in history.

However, I still hadn’t set foot in the other outbuildings or the mansion, so I reluctantly left this amazing chapel behind.

As I walked away from the chapel, I knew I had uncovered somewhere special, but figured, quite incorrectly, that my amazing discoveries were over. Boy, was I wrong!

Stepping into this dusty outbuilding, which was little more than a musty old shed, I was greeted by a large collection of firearms and weaponry. Theodore Davis Boal spent time in Europe not only while studying architecture but also started a cavalry unit that fought in Europe during World War 1.

During his time in Europe, he collected many weapons from both that conflict and from history. Some of these items were the seed that started the Pennsylvania Military Museum (located across the street on lands donated by Boal). However, Boal also kept some items in his personal collection, many of which are on display today.

Items range from a collection of German helmets from World War 1 and a large piece of canvas from a downed German airplane to historic rifles used by various countries during the war. The room also contains chain mail from 18th century Persia and a 15th-century European crossbow.

Possibly the most remarkable piece is a hat that once belonged to Mexican General Pancho Villa. Boal and his cavalry troop were sent to New Mexico in the years leading up to World War 1 to capture Villa. And, while they never did, his hat somehow ended up in Boal’s possession and is on display today (right next to a photo of Pancho Villa wearing that very hat).

Moving into the home, I continued to be blown away by the items located here, mostly thanks to family connections.

While learning about the Boal family history, it was casually mentioned that the piano in the corner of the room spent roughly 100 years in the White House, bought by Dolly Madison after the White House was burned in the War of 1812.

The story of the Boal family continues throughout the other ground-level rooms of the mansion, filled almost entirely with items owned by the family. While walking through the home, my guide told me stories of the family’s connections to famous individuals like Robert E. Lee and even Saint Bernard (after whom the dogs are named).

On the walls of the home are signed and personalized photos from Presidents John F. Kennedy, Franklin Delano Roosevelt, and Jimmy Carter. There is also a print signed by all three of the Apollo 11 astronauts after their successful moon landing.

The display case in the room contains a lock of Napoleon’s hair (he was related to the Boal family), as well as items from the graves of King Tut’s grandparents (a Boal relative financed Howard Carter’s first expedition in Egypt).

Truthfully, I’ve been to many large museums that don’t have the same number of awe-inspiring pieces that can be found in Boal’s Mansion. If you love history, the Columbus Chapel and Boal’s Mansion Museum should get put at the top of your must-see list in Pennsylvania.

Note: My visit to the Columbus Chapel and Boal’s Mansion Museum was hosted by the museum. However, the opinions expressed are my own.

Looking for more things to do in the area? Check out Shingletown Gap, Centre Furnace Mansion, and Greenwood Furnace State Park.

See map below for other area attractions.
3.9K shares 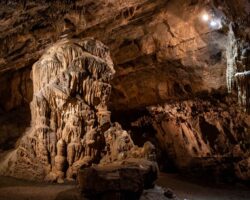 11 thoughts on “The Columbus Chapel and Boal Mansion Museum in Boalsburg: A Must-See Destination for History Lovers”