Northeastern Pennsylvania is home to 95% of the anthracite coal in the Western Hemisphere, and the industry was incredibly important to this region of the state during the 19th and early 20th centuries. In 1917, 100 million tons of anthracite coal was mined in the region. However, as other fuel sources became more popular and the coal became harder to get, the industry began to fade from prominence.

All throughout the region, evidence of the area’s coal mining history abounds. Sites like the Anthracite Heritage Museum, the Lackawanna Coal Mine Tour, and the Number 9 Coal Mine and Museum tell the story of mining in the region, while places like Centralia showcase some of the negative effects that mining can have on the region. However, if you want to learn about what life was like for those that worked in the coal mines, take a ride out to Eckley Miners’ Village.

The community was built beginning in the 1850s as a company town for Sharpe, Weiss, and Company, a coal mining company in the region. The miners lived in the community, rented their homes from the company, and shopped in the company store. This reliance on the company created a cycle that many miners, most new immigrants to America, struggled to get out of.

After the coal company shut down, the community continued to be owned by one person who rented out the homes to tenants. However, the village was falling into disrepair, and Eckley was slated to be demolished to make way for strip mining.

However, in the late 1960s, the Hollywood film, “The Molly Maguires,” starring Sean Connery and Richard Harris, was looking for an old coal town to film in. They chose to film in Eckley, which effectively saved the community.

After the filming was finished in 1968, local residents raised enough money to buy the village and turned it over to the state. Thanks to their actions, the community was opened to the public in the early 1970s as Eckley Miners’ Village.

Today, the village is run as a museum telling the story of the life of the miners and their families. It is also still a tenant community, with several dozen of the buildings being rented out to people from the community. Since the village has been run as a tenant community for 160 years, this gives a unique historical perspective to the community. However, aside from a stray air conditioner, you are unlikely to even notice which homes are currently being rented.

Eckley Miners’ Village is located directly next to the visitors center. The community consists of 45 buildings along the road, which stretches three-quarters of a mile. Visitors are welcome to take a self-guided tour through the community and look at the buildings from the outside.

However, I’d recommend taking a guided tour through the community. These tours cost only $2 extra and are offered once or twice daily during the summer months. Lasting approximately 1.5 hours and about a mile in length, these tours allow visitors to not only learn more about the village but to also go inside several buildings.

The first building that visitors can enter is the old Catholic Church. Known as Immaculate Conception Church, this decommissioned church is somewhat plain, but still quite beautiful on the inside. This was the church most often used by the working class residents of the community, many of whom were from predominantly Catholic countries.

Another building of note is the Laborer’s Dwelling. This building was a typical duplex with each side containing four rooms, two downstairs and two upstairs. Often times, a family would sleep on the first floor, and they would rent out the two upstairs rooms to single men, sometimes more than half-a-dozen at a time.

The two sides of the duplex have been set up to show how life evolved for the immigrant families that settled into the village. The first half is set up for a family that just arrived in Pennsylvania in the 1880s. The other side shows the same family in the 1890s. It’s interesting to see how family life would evolve in the community and what type of possessions they would typically acquire over the years.

A bit further down the street are two buildings that were built for the movie, “The Molly Maguires,” and have been worked into the village. The first is a reproduction Company Store. Inside, the shop has been set up as it would likely have been in the late 1800s. This store carried all of the goods that a mining family would need and served as the only place to purchase goods in the community.

Across the street is a large coal breaker (which can be seen in the movie’s trailer) that visitors are not allowed to tour. While the coal breaker would have been close to town, it would not have sat so close to the community in real life. However, it provides an interesting backdrop and does give a brief glimpse into what the working life was like for the miners.

Further still down the road through Eckley Miners’ Village is St. James Episcopal Church. This church served the more prominent workers at the mine who tended to be Protestants. This church is more ornate than the Catholic church in the village but is still somewhat plain by modern standards.

Overall, I’d definitely recommend a visit to Eckley Miners’ Village to anyone who is interested in history or wants to better understand the culture of the coal region of northeastern Pennsylvania. There is probably nowhere in Pennsylvania that offers a better chance to learn about the life and times of coal miners in the anthracite coal fields.

Looking for more places to visit nearby? Check out the Old Jail Museum in Jim Thorpe, the Lackawanna Coal Mine Tour, and the Shades of Death Trail in Hickory Run State Park.

Note: My visit to Eckley Miners’ Village was hosted by the site. However, the opinions expressed are my own.

See map below for other area attractions.
1.7K shares 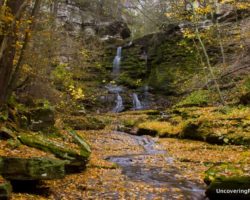