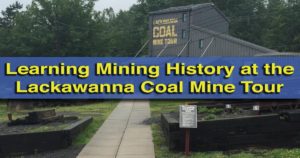 During my travels around Pennsylvania and the world, I’ve been down in my fair share of caverns. However, until recently, I had never been into a mine. Given Pennsylvania’s rich mining history, I jumped at the chance to check out the Lackawanna Coal Mine on the outskirts of Scranton.

The Lackawanna Coal Mine opened in 1860 and is set in the Northern Anthracite Coal Field, the largest of four coal fields in Pennsylvania. Before opening the mine, engineers had to figure out how to drain the entire valley of water to a depth of hundreds of feet. The mine operated for the next century, before finally closing in 1966.

The mine sat abandoned for several years before finally being stabilized and opened for tours in 1985. Over the last 30 years, thousands of visitors have taken the ride 300 feet below the earth’s surface to learn what life was like for the coal miners that once helped power this country.

Tours of the Lackawanna Coal Mine and its history start from the modern visitor center next to the mine entrance. Not to be confused with the Pioneer Tunnel Coal Mine tour in Ashland or the No. 9 Coal Mine in Lansford, you can browse the gift shop or watch a short film while you wait for your tour to start. Hard hats are required for all visitors and jackets are available to borrow (the mine is a constant 53 degrees).

To get into the mine, a mine car takes you down a very steep embankment to get below ground. It reminded me of the slow progress up the hill for a roller coaster, but instead, you are going downhill backwards into darkness. After a few minutes, however, the trip to the bottom ends.

The tour starts off in the Clark Bed. The entrance that visitors take today was never the mine’s main entrance, but was dug in later years as the mine was slowly shutting down. The hour-long tour of the mine is led by an experienced miner. My tour guide, Lou, was a fifth generation coal miner who had worked in mines a bit south of Scranton.

He took us around the mine, through three different coal beds, and explained how the mine worked, how it was kept safe, and what conditions were like for the miners. Throughout the mine, mannequins are set up to show workers going about their daily routine. To be honest, the first mannequin I saw startled me for a second as I wasn’t expecting to see a person down the passage.

In one corner of the mine was a collection of mining equipment. My guide spent some time going over the items and how a miner would get the coal and how that coal would make its way to the surface.

One of the most common ways was through mule drawn carts, which were led around by children. Before the advent of child-labor laws, children were a common sight in the mines and would often work very long hours for meager pay. There is a mannequin on display of a child leading a mule through the mine.

One thing that really impressed me as I went through the mine was the quality of the mine and how easy it was to move around. Thanks to strict laws, the mine is still inspected daily by a mine foreman and has to go through regular inspections to ensure safety. Because of these safety standards, the mine looked like a group of workers could walk back in any day and restart operations in the mine.

All too soon, the tour of the mine was over, and it was time for our 3-4 minute journey back above ground. Once back to the surface, take some time to check out the Pennsylvania Anthracite Heritage Museum, which is located right next door, or the rest of McDade Park.

I really can’t say enough good things about my experience at the Lackawanna Coal Mine Tour in Scranton. Other than being underground, it’s hard to make any similarities to being in a cavern, so this is definitely something to do even if you’ve seen more caves than you can shake a stick at.

Being underground and learning what life was like for the people who worked there definitely gave me a new appreciation for coal miners and the work that they have done to build the country and continue to do.

Check out our favorite things to do in the Scranton area including a pizza crawl through Old Forge.

See map below for other area attractions.
2.0K shares