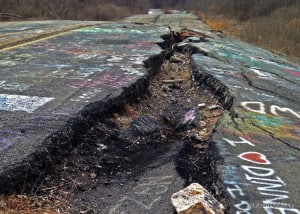 Disclosure: This article may contain affiliate links. We will make a small commission from these links if you order something at no additional cost to you.
Located in a quiet valley of Columbia County, Pennsylvania, is one of the state’s least likely and least publicized tourist attractions: Centralia. What draws people to this out-of-the-way town isn’t the amazing culture or the fascinating historical sites.

Instead, it’s the lack of things to see. You see, Centralia is a modern ghost town in PA. So, what’s the history of the town and what is there to do when visiting Centralia, PA? Keep reading to find out.

In the early sixties, the borough of Centralia was just like any number of coal region towns in Pennsylvania. The community of roughly 1,500 was supported by the seam of coal that ran beneath the town. However, in 1962, a fire was lit in the town dump that spread beneath the entire valley and threatened the community’s existence.

The full extent of the problem wasn’t known until 1979 when a gas station owner in Centralia measured the temperature of the gas in his underground containers to be more than 100° above normal. The situation escalated further when a 150-foot deep sinkhole opened beneath a 12-year old boy.

Fortunately, the boy escaped death, but that was the last straw for many residents of the town.

Over the next few years, the Centralia, PA fire continued to burn around the community, increasing the levels of toxic gases like carbon monoxide to dangerous levels. By 1990, only 63 residents remained and by 2012, there were only 10 people left in Centralia.

Over the last two decades, many of Centralia’s buildings have been torn down. However, there are still things to do in Centralia, PA.

Driving over the mountains from nearby Ashland, you’ll come over the crest of the hill to a marker that still welcomes you to the borough of Centralia. Just down the road are three very well-kept cemeteries.

In Odd Fellows Cemetery on your right, it is said that smoke from the fire can sometimes be seen rising through the ground, making for a very eerie scene. Even if there’s no smoke, however, the cemetery is interesting to see as the fence surrounding it and many of the gravestones show signs of how the fire has changed the landscape.


The land behind Odd Fellows Cemetery is where the fire is thought to have started. In this area, the effects of the fire can be clearly seen in the scorched earth and the plant life that has survived there. Metal venting tubes dot the landscape here, but little can be seen of the active fire on most days.

Continuing downhill into the town center, Centralia, Pennsylvania, almost has the feel of a town destroyed by war. Roads that once led to quiet residential streets now lead nowhere.

Driving down these deserted lanes, you can still see curbs, sidewalks, and front steps, many of which have been upturned by the power of the fire.

The few houses that remain sit in isolated pockets around town, surrounded by lots where nature is reclaiming the land once occupied by happy families.

The only spark of color in Centralia is the beautiful Assumption of the Blessed Virgin Mary Ukrainian Greek-Catholic Church which sits on a hill above town and still holds weekly services. One of five churches in town when the first started, it is the only one still standing.

Also worth seeing is the former Veteran’s Memorial, which still has a chain-link fence and the base where the veteran’s memorial statue once stood. There was also a time capsule buried in the park in 1966, but it was removed in 2014.

The primary highlight of Centralia used to be Graffiti Highway. Unfortunately, a lack of proper management of the site and a lack of respect from both locals and visitors caused this historic roadway to be covered in dirt in April 2020 instead of being protected as a historic landmark, as it should have been.

Centralia’s Graffiti Highway was located on what was once Route 61, the road that still runs from Ashland to Centralia. However, the fire necessitated such frequent and expensive repairs to the road, that Route 61 was permanently rerouted around the area in 1994.

What was left, was a 3/4 mile stretch of abandoned roadway near St. Ignatius Cemetery that showed the incredible power of the underground fire.

Over time, the road became covered in graffiti. Some of it was insightful sayings and some of it could have been considered art.  Unfortunately, a high percentage of the graffiti was quite vulgar.

Despite that, before it was covered by dirt, Graphiti Highway was the best spot to see evidence of the damage caused by the underground fire.

For a large portion of the highway, it looked simply like an overgrown, abandoned road, similar to the Abandoned PA Turnpike near Breezewood. However, in the middle of the destroyed section was a large crack that ran through the road.

A bit further down, the road buckled into a 3-foot tall wall of asphalt. In many ways, it looked more like a set from a blockbuster action movie than a peaceful country highway.

There were also reports that smoke could still be seen rising from the ground from time to time in this area, but those became more and more scarce over the years as the fire burned deeper underground.

What has happened to Centralia over the past 50 years is quite humbling. However, visiting is a great way to better understand the destructive power of nature.

While it might be one of Pennsylvania’s least likely and least publicized tourist attractions, a visit to Centralia, PA is definitely worthwhile, even with the loss of Graffiti Highway.

Check out our favorite abandoned places in PA that you can legally visit!

Note: There are still residents that live in town, and to my knowledge, all of the remaining buildings are occupied. Please make sure that you don’t disturb residents’ property and that you obey any “No Trespassing” signs that you might see while visiting Centralia, Pennsylvania. It’s also a good idea to stay upwind of any smoke or steam that you see rising from the ground as it’s likely toxic.

Need a hotel near Centralia? Here are a few great options:

Looking for other things to do near Centralia, PA? Head to the Pioneer Coal Mine Tunnel, Big Mine Run Geyser, the unusual Hooded Grave Cemetery, Knoebels Amusement Park, or Yuengling Brewery. If you enjoy this modern ghost town, consider Concrete City and the Abandoned Turnpike as your next destination.