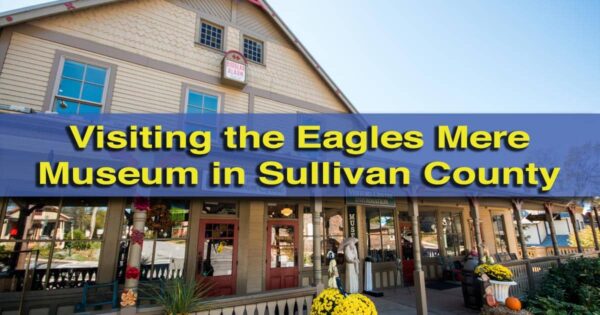 Tucked away in the Endless Mountains of Sullivan County is one of Pennsylvania’s quaintest towns: Eagles Mere.

Eagles Mere was laid out in the 1870s and quickly became a popular resort town due to its cool mountain air and natural lake. Visitors would climb aboard a narrow-gauge railroad in Sonestown for the trip up the mountain to the town.

Once there, visitors enjoyed the beautiful scenery and stayed at one of five luxurious hotels that were once located within the town. They also enjoyed plays at the community’s playhouse which brought in upcoming actors like Charlton Heston and Jennifer Jones.

After the 1940s, the resorts began to disappear and, today, sadly, none of them are left. Visitors still flock to the area around Eagles Mere for the area’s great natural beauty, but tend to spend more time exploring the trails, waterfalls, and vistas of Worlds End State Park and Loyalsock State Forest.

However, while Eagles Mere is now a community of only 120, it is still a quaint and beautiful place to visit.

The town’s main core features several shops and restaurants for visitors to enjoy, as well as the fantastic Eagles Mere Museum, which keeps the community resort tradition alive.

The museum is tucked inside a restored general store that doubles as a visitor information desk and gift shop. While I wouldn’t normally expect such a small town to have a great museum, the Eagles Mere Museum is incredibly well done.

The museum features high-quality displays punctuated by historical artifacts and well-written panels. It’s clear from the overall quality of the museum that the community takes a lot of pride in its history.

The museum showcases Eagles Mere history from the Native Americans that once inhabited the land through the town’s heyday, covering nearly every possible aspect of life in this former resort town. Visitors can see artifacts from the athletic teams that once played in the area, see memorabilia from the old hotels, and pieces from the industries that once thrived in the area.

Those looking for a more interactive element can watch an 18-minute film on the history of Eagles Mere or browse the touch-screen map that showcases what the town was like in 1920. This map is especially interesting if you’ve already had a chance to drive around town and have a feel for the area.

The museum’s second floor has a model railroad exhibit that shows a model of the narrow-gauge railroad that once brought visitors from Sonestown to Eagles Mere. This model is fascinating for its glimpse into the history and natural beauty of the surrounding area.

Honestly, I was incredibly surprised with how nice the Eagles Mere Museum is. If you enjoy visiting the many great outdoor attractions in the area, the museum offers a great bit of context regarding the development of the area, just as the nearby Sullivan County Historical Society Museum in Leporte does.

So, if you find yourself passing through Eagles Mere or stopping here for a bite to eat, take a few minutes to check out this great free museum. 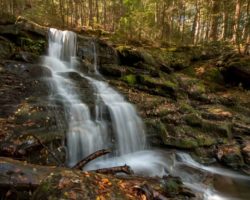 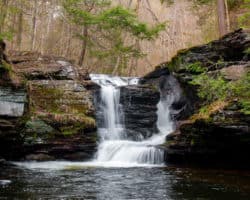