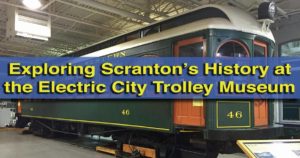 In 1886, just six short years after Thomas Edison had received his patent for the lightbulb and the first electric lights were installed in downtown Scranton’s streetlights, the city introduced America’s first all-electric street car system. There’s no doubt that in late 19th-century America, the sight of Scranton’s electric lights and streetcars would have amazed many, which is what led to a local preacher declaring Scranton to be “The Electric City,” a nickname that has stayed with Scranton into the 21st century.

Because of this rich history with electric streetcars, it makes perfect sense for Scranton to be home to a museum dedicated to preserving the history of streetcars in the region: The Electric City Trolley Museum.

The Electric City Trolley Museum is located on the same complex as the Steamtown National Historic Site, another museum that commemorates the city’s important role in transportation. The museum consists of a large museum building, as well as a trolley excursion that leaves from the nearby train tracks.

Unlike the other two trolley museums in Pennsylvania, the Electric City Trolley Museum is actually home to a great museum dedicated to the history of streetcars in both Scranton and the country.

Visits to the museum start with a video that talks about the history of streetcars in northeastern Pennsylvania. It does a great job setting the stage for a visit to the museum or a ride on one of the museum’s trolleys.

The museum itself is not overly large, especially compared to the train museum across the parking lot, but it does provide a lot of great detail and gives visitors the chance to climb aboard a handful of restored streetcars.  My personal favorite was the 1920’s streetcar that had part of its floor removed, allowing me to see the inner workings of the car.

In addition to the trolleys on display, the museum had a nice collection of tools, lights, and other pieces of equipment that helped build and maintain the trolley systems throughout the country. I especially enjoyed the 1918 map of streetcar lines in Pennsylvania. It’s amazing how pervasive trolleys were in the age before everyone had a car.

At the back of the museum, there is a large room filled with interactive exhibits for kids. While they may not teach children much about streetcars, most of the activities are somewhat related to streetcars and look like they would be a lot of fun for children, especially if you have to wait for a ride on the trolley.

Speaking of riding the trolley, the Electric City Trolley Museum does offer trolley rides on some of their operating days. The train rides along the original Laurel Line that stretches from downtown Scranton to PNC Park in Moosic. This 10-mile roundtrip travels from the trolley station, over Roaring Brook in Nay Aug Park and through a mile-long railroad tunnel. It eventually ends adjacent to the local minor league baseball stadium, before turning around and taking the same route back to the museum.

Along the way, volunteer conductors dressed in period attire explain how streetcars work, the history of the car you’re riding in, and what you can see out the window. Rides are on fully-restored trolleys, like the 1932 car that I rode on that had once been used for trips in suburban Philadelphia, and last a little less than an hour. Trolley rides are conducted Thursday – Sunday from late April through the end of October. They are also offered on a few dates in November and December.

Overall, I really enjoyed my visit to the Electric City Trolley Museum in Scranton. Having visited the other two trolley museums in Pennsylvania, I definitely think that this is the best of the bunch because of the great museum and very scenic excursion route. However, they do have fewer trolleys on display than the Pennsylvania Trolley Museum and the Rockhill Trolley Museum, so if you want to see old trolleys or are already in the area, those may be better choices.

Even better, go on a day when you can ride on both a trolley and on the train trips offered by Steamtown National Historic Site and make it a full day of fun riding on the rails in Scranton. Then learn even more about the county’s history at the Lackawanna County Historical Society.

Note: My visit to the Electric City Trolley Museum was hosted by the museum. However, the opinions expressed are my own.

See map below for other area attractions.
780 shares 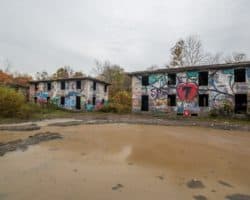