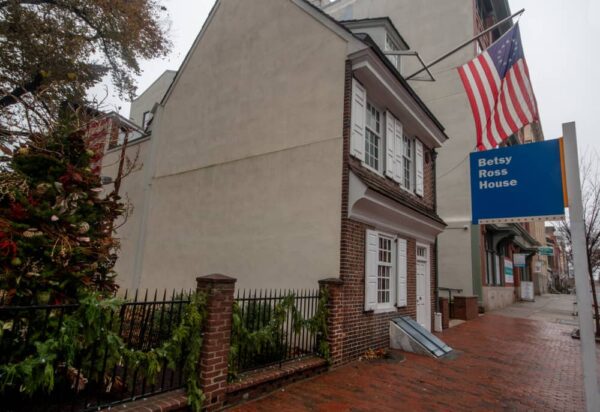 While the accuracy of this story is disputed, the Betsy Ross House in Philadelphia is still a fascinating place to visit.

The home is located on Arch Street in Philadelphia’s Old City, just a few steps away from both Christ Church, where Betsy Ross worshipped, and Elfreth’s Alley. While there is some debate whether Ross lived in this home or in another on the block, the home is sat up as it would likely have looked wherever she lived in the late 1770s.

Since 1898, the Betsy Ross House has been open to the public as the site where the first American flag was sewn. Initially, only the downstairs rooms were open. However, since a major renovation in the 1930s, the entire home has been open to for visitors to see.

Today, there is a beautiful courtyard next to the home that features a fountain and the grave of Betsy Ross. Not surprisingly given the questions around the story of the flag and the home itself, there are also questions about the grave.

Betsy Ross was first buried in the Free Quaker Burial Ground when she died in 1836. Twenty years later, he remains were moved to a family plot in Mount Moriah Cemetery.

In 1976, there were plans to rebury her at the home as part of the country’s bicentennial celebrations. However, when they went to once again remove her remains, no body was found in her gravesite. So, they removed a nearby female body and buried it at the home. Was that the remains of Betsy Ross? No one is quite sure.

To enter the home, head into the addition at the back of the home which serves as a gift shop and visitor center.

While you have the option of paying a bit less for a standard tour, I highly recommend paying the few extra dollars for an audio guide. While the signage in the home is decent, the guide adds a ton of great context to the visit. There is even an audio guide for kids that helps them to understand the home.

Whether you pay the extra for an audio guide or not, tours of the home are self-guided. Visits to the Betsy Ross House take you through the two above-ground floors of the home, as well as into the cellar.

Tours start on the first floor which is where you’ll find the parlor, which is where Ross is said to have met with George Washington about the flag, and Betsy’s upholstery shop.

The upholstery shop is the best part of the home as this is where you’ll find a reenactor telling the story of Betsy Ross’ life. The costumed reenactors do an excellent job of highlighting different aspects of her life, and you’ll get different stories depending on the age of the reenactor, which helps bring the story to life more and make multiple visits here worthwhile.

The upstairs portion of the home features a room set up as Betsy Ross’ bedroom. While her upholstery shop was downtown, she wouldn’t have sewn the flag there. Creating the flag would have been an act of treason, so she would have done it in the privacy of her room where she could have been alone and kept her work out of sight.

The cellar of the home is set up as a kitchen and storage area and offers several fun interactive areas for kids to play in.

Overall, I enjoyed my visit to the Betsy Ross House. While it’s a mystery as to whether Ross lived here, is buried here, or even had anything to do with the flag, it’s still a fascinating look into the life of a prominent woman who lived in the city in the 18th and 19th centuries.

This by itself provides a unique perspective that you don’t normally hear and makes visits to the home worthwhile regardless of whether Betsy Ross really did sew the first flag or not.

While the Betsy Ross House might not be on the list of places you should visit on your first visit to Philly, this is an interesting spot that is worth checking out.

Note: My visit to the Betsy Ross House was hosted by the site. However, the opinions expressed are my own.

Looking for more spots to visit nearby? Check out the Benjamin Franklin Museum, Independence Hall, and the Museum of the American Revolution.

You can also drive to Carlisle to see the grave of Molly Pitcher, another heroine of the Revolutionary War. 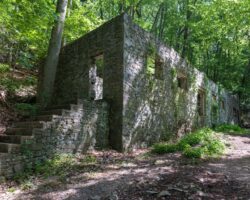