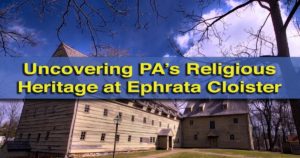 When Pennsylvania was founded by William Penn in 1681, one of the core tenants of the new colony was religious freedom. While this freedom might seem ordinary today, it was quite novel in the late 17th century. This is the reason that Pennsylvania became home to many Amish communities, and it’s also the reason that a young Conrad Beissel came to Pennsylvania in 1720.

Beissel was born in Palatinate, a region of what is now Germany, in 1691. He became involved with the Pietists, a religious group that did not get along with the state-sponsored church. His involvement saw him banned from his homeland in 1715. And, five years later, at the advice of a friend, he came to Pennsylvania.

Beissel was initially involved with the Brethren, even becoming the leader of a church in Lancaster County. However, some of his religious ideas clashed with church leadership, and by 1728, he left the church.

In 1732, Beissel decided to move to the frontier to live the life of a hermit. However, he had amassed a dedicated group of followers who soon set up a community around his home. This community would come to be known as Ephrata.

Modern-day Ephrata is a bustling borough in northern Lancaster County with a population of over 13,000 people. However, when Beissel arrived, this area was wild and largely uninhabited. The community sprang up around Beissel’s home along the banks of Middle Creek and was home to hundreds of church members and over 50 businesses. These businesses included a very active printing press, fraktur writings, and farmland.

Beissel encouraged, but did not require celibacy, but at its height, 80 celibate members lived in the community. These semi-monastic members lived in two houses divided by gender. Their lives were controlled by strict schedules that were designed to help them free themselves from their earthly bodies. Members ate once per day, wore plain white robes, and slept on wooden beds. Their beds were designed to keep them ready for Jesus’ return, which Beissel believed would happen during his lifetime. To be even more prepared, the members would worship from midnight to 2am each night.

After Beissel’s death in 1768, the community quickly began to change, and the last celibate member died in 1813. The remaining married members, however, kept the church going, calling themselves the Seventh Day German Baptists. Poorer members of the community moved into the community buildings, and the buildings were in regular use until the site was taken over by the state in 1941.

In order to preserve the site’s historic importance, the nine remaining buildings were restored to their original condition, and several other buildings were rebuilt to show what the community was like during the mid-1700s.

Tours of the grounds leave from the visitor center several times throughout the day, and last about one hour. These tours take you into three of the site’s original buildings: Conrad Beissel’s home, the Sisters’ House (Saron), and the Sisters’ Meetinghouse (Saal).

Tours start with a 15-minute orientation video that tells you about the history of the site and the life of Beissel. There is also a small, but interesting museum in the visitor center that is worth taking the time to look at either before or after your tour. It’s worth noting that the museum is free to visit, if you don’t have the time to tour the grounds of Ephrata Cloister.

Beissel’s home is one of several that he lived at while in Ephrata, and its central location between the Brothers’ and Sisters’ Houses shows its significance. I was a bit disappointed to see that the home has been set up as more of an interior lecture space than an accurate representation of what it looked like when Beissel lived there. However, they have clearly taken steps to ensure that it retains the feel of the 18th-century community.

The truly interesting part of the tour is within the connected Sisters’ House and Meetinghouse. Originally, a Brothers’ Meetinghouse sat less than 100 yards away, but it was destroyed in the early 19th century. However, the Sisters’ House offers a unique look into what life was like for the celibate women that resided here. Built in 1743, this was the living and working area for the women who resided in the community.

This three-story building was identical on each floor, and I’ve been told the third floor remains in its original, yet unrestored, state. The first floor features a variety of furniture, some of which is original to the site and some of which has been reproduced. The sparse lifestyle of the women is evident in the building’s furniture and design.

Connected to the house is the Sisters’ Meetinghouse. This two-story chapel was used by the women for worship from midnight to 2am every night of the week. Later, it became the regular meeting hall for the German Seventh Day Baptist Church in Ephrata. Above the alter, there is a large fraktur print that was made in the community over 250 years ago. This is one of 13 original posters that survive.

The Meetinghouse is home to occasional concerts by the Ephrata Cloister Chorus. These singers still perform the traditional music that the community produced, while wearing the traditional white robes. A small sample of their singing can be found in this video.

After the tour, which offers a great overview of the site, visitors are free to walk around on their own. Each of the site’s buildings features a free cell phone tour that provides a lot of great information about each of the buildings and their importance to the community. Several of these outer buildings are open to visitors, so make sure you take the time to visit them.

There is also a small graveyard just below the Sisters’ House. In this graveyard, many of the members of the community are buried, including Conrad Beissel. The gravestones are all in German, the language of the 18th-century community, but several of the stones have been translated with nearby signage.

Before you leave, make sure to check out the gift shop. While it was unfortunately closed during my visit, it is open March-December every year and features many handmade products done by local artisans.

Overall, I quite enjoyed my visit to Ephrata Cloister in northern Lancaster County. It offers a peek into one of colonial America’s most unusual religious societies and gives a great perspective on how the religious freedom instilled into Pennsylvania by William Penn shaped the colony in the 18th century and beyond.

Note: My visit to Ephrata Cloister was hosted by the site. However, the opinions expressed are my own. 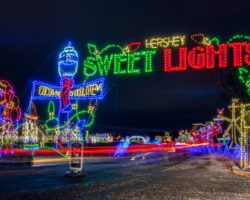