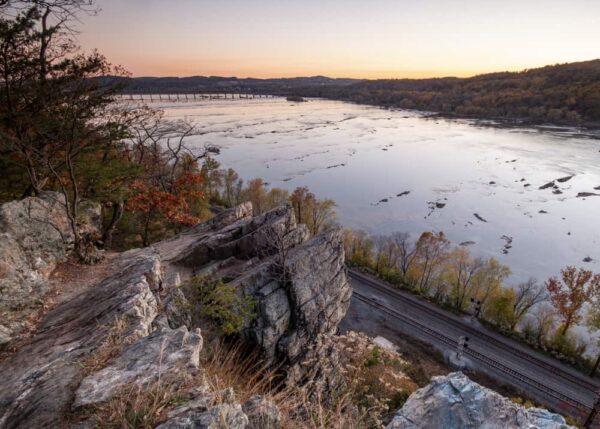 Disclosure: This article may contain affiliate links. We will make a small commission from these links if you order something at no additional cost to you.
The shores of the Susquehanna River south of Harrisburg are home to a myriad of great places to visit. Whether you want to explore industrial ruins, take a bike ride, visit waterfalls, go for a hike, or even explore a cave, there’s a lot of outdoor fun to be had along the river.

In addition to the activities I just mentioned, another great option is to explore the river’s shoreline from an overlook. And, while there are plenty to pick from, one of my favorites is Chickies Rock.

Located on the eastern shores of the Susquehanna River in Lancaster County, just north of Columbia, Chickies Rock is an outcropping that stands more than 100 feet above the water and railroad tracks.

The overlook is located in Chickies Rock County Park, a 400-acre park located along Route 441. While there are several trails that pass through the park, including the Northwest Lancaster County River Trail (a great rail trail for bikers), the highlight of the park is the short hike to Chickies Rock.

From a parking lot along the road, the trail begins with a short, but steep climb up to the main path. At the top of the incline, a fairly level path continues to near Chickies Rock. Near the rock, a short, and obvious spur trail leads to the outcropping.

While it looks like an old roadway, the main trail to the overlook was actually a trolley path at one point. Riders would climb aboard the trolley to visit an amusement park that was once located near the overlook. Sadly, I could find no remnants of this 19th-century amusement park during my visit.

All told, the hike to Chickies Rock is roughly half a mile in length, and, aside from the steep climb at the beginning, it’s quite an easy trail.

The view from Chickies Rock is quite expansive. Located at a bend in the Susquehanna, it’s possible to see for miles in nearly every direction.

Fences keep visitors back from the edge of the cliffs. Make sure to stay behind these barriers as people have died while standing too close to the edge.


This rock outcropping has some interesting history because it was used as an observation point during the Civil War. Union soldiers used Chickies Rock to observe Confederate soldiers who had made it as far as Wrightsville in the days leading up to the Battle of Gettysburg.

While there are many great overlooks along the Susquehanna River, few are better than Chickies Rock. However, while the hike to this overlook is well worth it, there’s another overlook in the park that you can nearly drive to.

Located between Chickies Rock and downtown Columbia is Breezyview Overlook. Part of Chickies Rock County Park, this overlook features a parking area, a beautiful gazebo, and impressive views of the Susquehanna River far below.

While it’s not quite as expansive of a view as the one from Chickies Rock, this is a perfect spot for those that can’t hike to the main overlook or who don’t have the time.

No matter which overlook you visit, definitely take the time to explore Chickies Rock County Park. It’s one of many great spots along the southern PA shores of the Susquehanna River.

How to Get to Chickies Rock

Caution is needed when pulling in and out of the parking lot as there is a large height difference between the roadway and the parking area. It’s also located at a bend in the road, and it can be difficult to see oncoming traffic.

From the parking area, an obvious trail leads away from the road and is easily followed for the half-mile hike to Chickies Rock.

A map of the trails can be found on the website for Chickies Rock County Park.

While a few trails pass from Breezyview Overlook into the woods to the south, there are no other vistas to be found along these trails. However, views can be seen when the leaves are off of the trees, and this area makes for a nice, short hike.

Explore more great spots in the area including the National Watch and Clock Museum, the Turkey Hill Experience, and the covered bridges of Lancaster County.

3 thoughts on “Hiking to Chickies Rock in Lancaster County, PA”