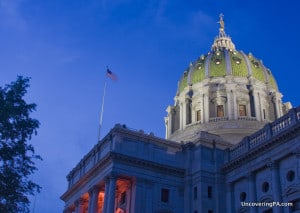 Situated in the heart of downtown Harrisburg is a building once called by President Theodore Roosevelt the “handsomest building I ever saw”: the Pennsylvania State Capitol. If you’ve ever visited the city, it’s likely that you’ve seen this majestic building, or at least its green dome, standing out among the otherwise unremarkable skyline.

The capital of Pennsylvania was moved from Philadelphia to Lancaster in 1799, and then to Harrisburg in 1812. The first capital building burned to the ground in 1897, and the second was abandoned due to a lack of funding in 1899. Finally, after four years of construction, the capitol building you see today was dedicated in 1906. However, it was another 21 years before all of the interior artwork was completed.

Today, more than 100 years after its dedication, the Pennsylvania State Capitol building is still one of the “handsomest” buildings you’ll find in America. However, if you’ve only seen the outside of this majestic building, you’re missing out on the even more spectacular interior. This is definitely one of the most beautiful places in the city and a great place for photographers visiting Harrisburg.

I recently had the chance to the visit the capitol building for the first time in many years. Stepping through the giant bronze doors, I was instantly struck with how beautiful the inside of the building was. The rotunda dome towered more than 200 feet above my head and was painted with one of the most striking patterns I had ever seen. The painted and tiled murals that lined the walls near the dome created a feeling of grandeur and elegance that you usually only find in the most beautifully designed churches in Europe.

While it is possible to visit the Pennsylvania State Capitol building without a tour guide, I would highly recommend the free tours that they offer of the building. Since it is a working government building, there are no signs to tell you about the building’s history. And, while there is a brochure for self-guided tours, there is really no reason not to take one of the guided tours offered daily.

Tours of the building last roughly 30 minutes, and start under the capitol’s rotunda with a bit of information about the building and its construction. The guides are incredibly knowledgable about the building, even knowing where the tiles on the rotunda come from (the still operating Moravian Pottery and Tile Works in Doylestown, Pennsylvania).

Both rooms are quite exquisite, with large murals decorating each chamber, and old mahogany desks sitting on the floor below.

If you visit on a weekday, it’s also worth spending some time visiting the Capitol Welcome Center, which has more information about the entire Capitol complex, including the State Museum of Pennsylvania, and several interactive exhibits to help teach children more about the building.

I was quite surprised by how much I enjoyed my tour of the Pennsylvania State Capitol in Harrisburg. Having not been inside the building in many years, I had forgotten how remarkably beautiful it is, and I really enjoyed learning more about the capitol’s history. If you are planning a trip to Harrisburg, I would definitely recommend taking a bit of time to tour the Pennsylvania State Capitol. It’s definitely one of the best free things to do in Harrisburg.

Note: Guided tours are limited to 40 guests per session so reservations are recommended and can be made by calling 1-800-868-7672. 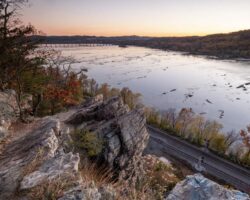