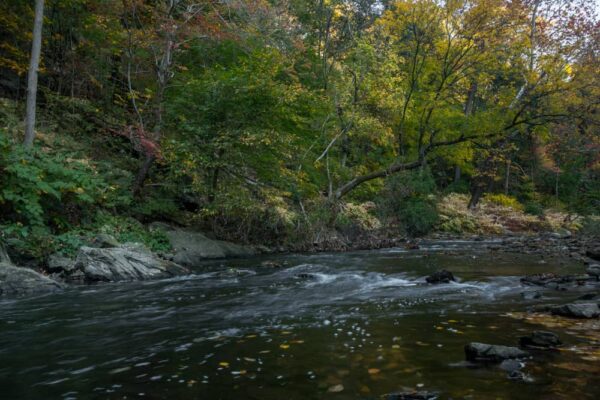 Philadelphia is a city known for its importance in American history and its many great museums. However, Philly is also home to many amazing outdoor areas. One of my favorites is Wissahickon Gorge.

Officially known as Wissahickon Valley Park, there are many great things to do in Wissahickon Gorge. Of course, the area is primarily known for its natural beauty. In fact, if it weren’t for the near-constant din of nearby roadways, the gorge would feel miles away from the world. It’s an especially great spot to enjoy fall in Philadelphia.

The beauty of this area has drawn visitors for years, with highlights of the gorge including sites known to Native Americans and to colonial-era religious hermits.

It was also a favorite of author Edgar Allan Poe during his time in Philadelphia. He even wrote a short story titled, “Morning on the Wissahiccon (sic)” is which he penned, “Now the Wissahiccon (sic) is of so remarkable a loveliness that, were it flowing in England, it would be the theme of every bard, and the common topic of every tongue.”

If you’re looking for things to do in Wissahickon Gorge, you won’t be disappointed in this 1,800-acre park. With over 50 miles of trails to explore, many historic buildings, statues, caves, etc., there’s a bit of something for every outdoor and history lover to explore in this overlooked park.

Here are 10 of my favorite things to see in Wissahickon Valley Park, listed from south to north.

The Cave of Kelpius is one of the more interesting and little-known stories of the Wissahickon Gorge. Located on the western hillsides above the creek, the Cave of Kelpius may have been the home of Johannes Kelpius, an immigrant that led a group called The Society of the Woman in the Wilderness in the late 17th and early 18th century.

While the cave might also just be a springhouse for a nearby home, it’s still an interesting site to see. The Cave of Kelpius can be found at the following coordinates: 40.023769, -75.201553. The closest trailhead is located along Hermit Avenue, about a quarter mile from the cave.

The Wissahickon Memorial Bridge, also known as the Henry Avenue Bridge, is the second bridge over the Wissahickon upstream of its confluence with the Schuylkill River.


Completed in 1932, this bridge reaches heights of up to 170 feet above the creek. This bridge offers an amazing view looking out over the Wissahickon Gorge from above, but the best spot to enjoy the bridge, in my opinion, is from below.

From creek level, you can appreciate the awesomeness of this bridge, as well as the beauty of the gorge. If the water is still enough, the bridge creates a beautiful reflection in the water and the sheer cliffs in this part of the gorge.

The area below the Wissahickon Memorial Bridge can be found at the following coordinates: 40.024648, -75.195169. The closest parking area is just to the north in an area called Ten Box.

Lover’s Leap is located just up the hillside from the area below the Wissahickon Memorial Bridge but is not easily accessible from either the bike path below or the bridge itself. The easiest way to reach this rocky outcropping is from the parking area along Hermit Lane, which is the same parking area for the Cave of Kelpius.

While there may be a story associated with the name, this outcropping offers a nice view of the valley below. However, it is blocked somewhat by trees, so the best views are to be had during the winter.

When William Penn founded Pennsylvania, he did it with a desire for religious freedom and toleration for all. Today, that principle is honored with a beautiful statue in the woods of Wissahickon Valley Park. The statue was a gift to the city from a local merchant and was designed by Herman Kirn in 1883. The statue stands atop a rock outcropping and overlooks the beautiful city that Penn founded.

The statue can be found along a small side trail on the eastern banks of the Wissahickon Creek at the following coordinates: 40.035339, -75.199711. The closest parking area is along Park Line Drive. A short trail leads from here to the statue.

The Fingerspan Bridge is located in one of the most remote portions of the park and is both a functional bridge and a piece of art. Fabricated from a ship’s stairwell by artist Jody Pinto, the bridge was designed to resemble a finger and was installed in 1987 by helicopters. It carries pedestrians over a chasm in the rocks.

No one quite knows how the Devil’s Pool got its name. However, this deep pool of water is certainly a beautiful site to see. A small waterfall, the only waterfall in Philly, cascades through the rocks on Cresheim Creek, just a few feet upstream of its confluence with the Wissahickon.

This beautiful natural site has unfortunately been marred in recent years as it has become a popular hangout spot for local youth. Still, if you have a chance to visit it outside of peak times, this is a great spot to see. It’s also worth noting that if you approach Devil’s Pool from the north, you’ll pass over some beautiful rocks along the Wissahickon Creek.

Devil’s Pool can be found at the following coordinates: 40.050958, -75.214245. The closest parking area is Glen Fern, but most people park at the Valley Green Inn when visiting.

The inn is located in a beautiful spot in the park and is a popular starting point for both hikers and bikers thanks to its central location and ample parking.

The Tedyuscung Statue pays homage to the Lenape tribe that once occupied the land that today makes up Wissahickon Valley Park. Carved in the early 1900s by John Massey Rhind, the marble statue replaces a wooden statue that was originally placed on the site in the 1850s.

The site was chosen because it was believed that this was Council Rock, where the Lenape would hold gatherings. However, no evidence of this has been found. Even more interesting, the statue is depicted wearing clothing that wasn’t worn by the Lenape. Nevertheless, it’s still a beautiful monument in the park that’s worth seeing.

The Tedyuscung Statue can be found at the following coordinates: 40.068231, -75.220287. Getting a close look at it is a bit of a challenge with the surrounding forest and the rocky outcroppings. The closest parking area is located along West Chestnut Hill Avenue.

Houston Meadow is one of two beautiful meadows within Wissahickon Gorge. This nearly 50-acre meadow was created in the early 2000s to provide a unique habitat within the city.

Today, it’s home to several crisscrossing trails that are more popular with mountain bikers than hikers. In fact, you’re unlikely to see any other hikers while walking through the meadow. If the other things to do in Wissahickon Gorge are a bit too crowded for you, this is a great area to get away.

The easiest-to-reach entrance to Houston Meadow is located behind Houston Playground at the following coordinates: 40.069750, -75.230471. The nearest area to park is along Sequoia Road next to the park.

Thomas Mill Covered Bridge is the only historic covered bridge in Philadelphia, and the only covered bridge remaining in any major city in the United States. Completed in 1855, it spans 86.5 feet over the Wissahickon Creek. It was refurbished in 1939 and again in 2000 and now carries pedestrians, bicyclists, and horses over the creek.

The area around the bridge is very scenic with a small man-made waterfall and several historic buildings. I put together an entire post on Thomas Mill Covered Bridge which showcases some of my favorite photos of the bridge and offers advice on the best nearby parking areas. 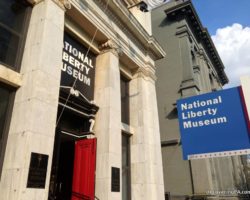