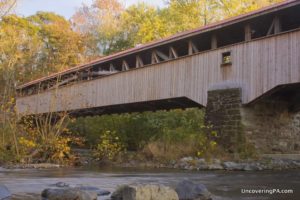 Juniata County is home to three covered bridges after one collapsed in early 2017. Despite not having a large number, the bridges of Juniata County really span a broad range of quality. Two of the bridges are very well maintained, including the longest surviving covered bridge in Pennsylvania. On the other hand, there is also one bridge in the county that is likely to fall over if you look at it the wrong way.

Unfortunately, since the bridge in poor condition is privately owned, it is unlikely that it will be repaired. Eventually, it will collapse and be lost forever, as Dimmsville Covered Bridge did in 2017. However, while it is still standing, it is somewhat interesting to see what a dilapidated bridge looks like.

For ease, I’m going to cover the bridges west to east, which coincidentally is also south to north. If you are just visiting the covered bridges of Juniata County, Pennsylvania, you are looking at roughly 35 miles of driving over the course of an hour, plus, of course, however much time you spend at the bridges.

For each bridge below, coordinates have been provided. To use them, simply copy/paste both numbers into your GPS.  There is also a map at the bottom of this article so you can see where each bridge is located.

If you only have time to visit one covered bridge in Pennsylvania, this is the one to see.

Not only is this the longest covered bridge remaining in the state, but it is also one of the most beautiful. While you can’t drive across it anymore, visitors are allowed to walk across the bridge. There are also several signposts that explain the bridge’s history and restoration, along with a guest book visitors can sign.

The bridge itself spans 278 feet over Tuscarora Creek and was built in 1902 to replace a flood-damaged bridge that was built in 1870. The bridge is owned by the Juniata County Historical Society and finished a refurbishment in 2009.

Getting to Academia Pomeroy Covered Bridge: Getting to the bridge is relatively simple if you know where you are going. And, while parking isn’t that difficult, you will have to pull off to the side of the road. Make sure to pay attention to private property when parking in the area.

The bridge is privately owned, and while there is a sign prohibiting driving across the bridge, there is not a no trespassing sign, so I’m assuming that walking across it is perfectly acceptable as long as you’re respectful to the bridge and surrounding area.

The bridge was originally built in 1888, though a sign on the bridge says 1858. It was destroyed by Hurricane Agnes in 1972, but the Lehman family rebuilt the bridge and have kept it looking quite beautiful over the ensuing years.

Port Royal Covered Bridge is 107-feet long and hasn’t been painted, giving it a beautiful, natural appearance against the forested East Licking Creek below.

This is your best bet for parking, as there is nowhere to park on the far side of the bridge.

Update 4/17/17: Dimmsville Covered Bridge has collapsed and isn’t likely to be rebuilt. The information and photos have been left up for posterity.

Unfortunately, the name of this covered bridge is quite fitting, as its future is quite dim. Of all the covered bridges I’ve visited in Pennsylvania, Dimmsville might be in the worst shape. In fact, I can’t imagine it surviving even a minor flood or snowstorm.

Looking at the pictures of the bridge, it likely isn’t hard to see the problem. The top of the bridge is leaning at a significant angle, and the sides don’t look very sturdy either. Given the bridge’s age and private ownership, it’s not entirely surprising that it’s in such a state, but it’s still a bit sad to look at.

Dimmsville Covered Bridges was originally built in 1902 and spans 100 feet over Cocolamus Creek. The bridge sits entirely on private property, so good vantage points are difficult to find.

Fortunately, the bridge that bypasses the bridge is very close, offering a nice view for visitors. Even though the road isn’t heavily traveled, keep in mind you are walking and viewing from a public road and use caution.

Given the sad state of the bridge, this is definitely one to see soon before it gets destroyed.

Getting to Dimmsville Covered Bridge: The bridge is located in Greenwood Township, north of Route 22, in a very rural section of Juniata County. There isn’t really anywhere to park, but pulling off to the side of the road is possible given how infrequent traffic is. The coordinates for the bridge are 40.60663,-77.13869.

Also known as Meiser’s Covered Bridge or Sheaffer Covered Bridge, this is another dilapidated bridge that sits on private land. At 90-feet long, the bridge over Mahantango Creek is the shortest covered bridge in Juniata County.

Built in 1907, the bridge is one of two that connect Juniata County and Snyder County. The other being the nearby North Oriental Covered Bridge.

According to my research, this bridge is owned by two different people. One wants to restore it, but the other doesn’t. Because of that, the bridge continues to deteriorate, and even from a distance, you’ll be able to notice sideboards missing. Fortunately, though, the bridge doesn’t appear to have a major slant like Dimmsville Covered Bridge.

The area around the bridge is all private property, but the Juniata side of the river isn’t posted. However, I would still recommend staying off of the private property. Because of this, the best view for most will be the bridge over Mahantango Creek, which sits about 200 yards downriver from the bridge.

If you are looking for a closer view, walking in the water is likely acceptable, but you’ll of course get wet. Fortunately, the creek here is fairly shallow most of the year.

Getting to East Oriental Covered Bridge: East Oriental is northeast of Dimmsville Covered Bridge and sits in a similarly rural area of Juniata and Snyder Counties. The area around the bridge is taken up by farmland and several homes. It can be found at the following coordinates: 40.638674, -77.001221.

There is a bit of space to park your car on the Juniata County side of Mahantango Creek where the guardrails end. It’s worth noting that while this isn’t posted, it may very well be private property, so please be respectful. From the parking area, you’ll have to walk about 50 yards to the bridge to get a good view of the East Oriental Covered Bridge.

Please use caution as this is a public road and appeared to be used by a fair number of cars.

3 thoughts on “Visiting the Covered Bridges of Juniata County, Pennsylvania”