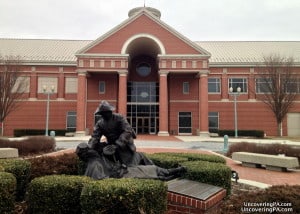 Sitting atop a large hill on the outskirts of Harrisburg is one of the region’s best museums: the National Civil War Museum. Telling the story of the entire Civil War with a focus on “equally balanced presentations…without bias to Union or Confederate causes,” the museum offers a very detailed overview that should impress even Civil War buffs.

While the museum’s focus is on the war itself, it starts by giving an overview of the events that led up to the Civil War. A life-size diorama of a slave auction, complete with dialogue provides an interesting look into one of the most inhumane aspects of American life prior to the war.

The first section of the museum also introduces you to 10 historical figures who were affected by the Civil War. Throughout the museum, you’ll see videos of their stories told by actors.

This gives a great glimpse into how the Civil War shaped society and really puts a human touch on the war, much like the Shriver House in Gettysburg.

However, the National Civil War Museum doesn’t just focus on the stories of those impacted by the war. It also has a lot of great information about the war itself. Each major battle of the Civil War has its own placard that explains the events surrounding the battle, and there are several life-size dioramas that depict scenes of interest.

One display that I found especially interesting was about Camp Curtin. Located in Harrisburg, Camp Curtin was the largest Union training ground. Today, nothing remains of this important site; however, the National Civil War Museum has put together a nice diorama that gives you a glimpse into what life was like in the camp.

However, even when focusing on the Civil War and its battles, the focus is still on the human side of the conflict, with items relating to how soldiers lived their lives and how the battle affected them. This includes a very large collection of Civil War uniforms that allow you to see what different units and branches wore during the war.

Knowing that the National Civil War Museum focused on the entire war, I expected it to to be a very basic overview of the events of the war. And, while this is true to an extent, they did a great job providing information that isn’t widely known. I consider myself fairly knowledgable on the events of the US Civil War, and I definitely learned many new things during my visit.

Because of this, I think the museum is a great destination for anyone with even a passing interest in the Civil War. For those who just want to learn a bit about this part in American history, the displays are a great way to learn about the most important parts of the war.

For those with an interest in the Civil War, visiting the National Civil War Museum will provide you with a great overview of events and likely a few nuggets of information that you didn’t know.

Since the National Civil War Museum is located less than an hour from the Gettysburg Battlefield, it’s a great destination for anyone interested in learning more about the entire Civil War.

Note: I was a guest of the National Civil War Museum. However, the opinions expressed in the article are my own and were not subject to review. 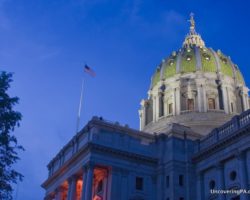