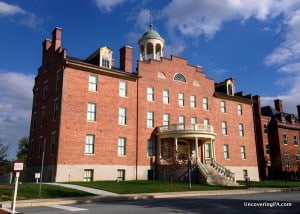 For nearly 40 years, the red brick buildings of the Lutheran Theological Seminary at Gettysburg sat quietly on a ridge overlooking the small town of Gettysburg. Surrounded by farmland, the peaceful setting must have be a perfect retreat for those studying to become Lutheran ministers.

However, on the morning of July 1, 1863, that peacefulness was shattered by the ferocious fighting that enveloped Seminary Ridge on the first day of the Battle of Gettysburg.

Sitting precariously close to the Union line was the Seminary’s largest building. Because of its four-story height, the building’s cupola provided the perfect vantage point for Union leaders to direct troops throughout the battle. The building also was in the perfect location for a Union field hospital during the battle, the first of hundreds in the town of Gettysburg.

However, by nightfall on July 1, 1863, the Seminary and the whole of Seminary Ridge fell into Confederate hands as the Union making a swift retreat to Cemetery Ridge on the other side of Gettysburg.

While that day’s battle was the last fighting that the Seminary bore witness to, its importance in the Battle of Gettysburg was just beginning.

Over the next two days, both Confederate and Union wounded were tended to throughout the entire four floors of the building. The makeshift hospital was overloaded with dying, amputated, and recovering soldiers.

All told, at least 70 soldiers succumbed to their wounds in the Seminary and hundreds more were cared for within its walls. It wasn’t until 2.5 months after the battle that the last soldier finally left the Seminary for good.

Fast-forward to July 1, 2013, exactly 150 years to the day after the Battle of Gettysburg started. Having seen the need for a museum that expanded on some of the lesser-known stories of the battle, the Adams County Historical Society opened the Seminary Ridge Museum.

Housed in the very same building that once served as a lookout post and battlefield hospital, the Seminary Ridge Museum is without a doubt one of the best historical museums in all of Pennsylvania.

There are two main areas that set the Seminary Ridge Museum apart from the museum at the Gettysburg Battlefield Visitor’s Center.

The first is the building’s history. While the museum at the Visitor’s Center is incredibly well done, the Seminary Ridge Museum is set in the actual building where the events happened. This makes the displays that much more moving. As the museum’s slogan so aptly states, “Some relics you can hold in your hand; others, you can walk inside.”

After watching the introduction video on the first floor, tours of the museum start on the fourth floor of the building. The fourth floor digs deeply into the battle’s first day, discussing it much more in depth than the museum at the official visitor center. This gives you a great opportunity to understand how the first day’s battle affected the next two days of fighting.

Moving down a floor, the third floor discusses how the wounded soldiers were cared for, both during the Battle of Gettysburg and throughout the entire Civil War. To help you better understand the conditions of this battlefield hospital, quite realistic, life-size dioramas are used.

Having no idea they were coming, the first one actually freaked me out a bit. Given that I was touring the museum by myself and the building is considered to be quite haunted, I had to stare at the mannequins for a few seconds to convince myself that their eerily realistic appearance was indeed fake.

The museum spares no expense in these displays and in the descriptions of battlefield medicine in this area. Those with young children might want to consider skipping the third floor.

The second floor, which is the last area of the museum focuses on religious faith during the Civil War, how the battle affected the locals, and African-Americans during the war. I found the section on religion to be quite interesting because they discussed Biblical passages that were important to the beliefs of soldiers on both sides and talked about how they practiced their faith during the war.

Overall, the Seminary Ridge Museum is absolutely fantastic. The fact that you were discovering the battle’s history in one of its most important buildings was very interesting, and the different subjects covered proved refreshing after taking a tour of the battlefield.

That being said, if you only have the time or interest for one museum while in Gettysburg, the museum at the Gettysburg Battlefield Visitor’s Center gives you a much better overview of the entire battle and should be your first choice.

However, if you have the time for a second museum, or are very interested in one of the subjects covered, the Seminary Ridge Museum will not disappoint.

The Seminary Ridge Museum is located a short distance off the main path of travelers in the area on the grounds of the still functioning Lutheran Seminary.

Parking is located across the street from the building, and the entrance is around the backside of the Seminary building, now sometimes referred to as Schmucker Hall.

Note: My visit to the Seminary Ridge Museum was sponsored by the Gettysburg Visitor’s Bureau. However, the opinions expressed in the article are my own and were not subject to review. 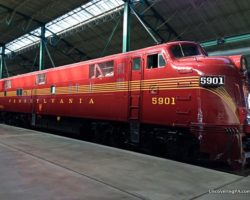 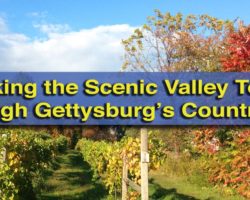