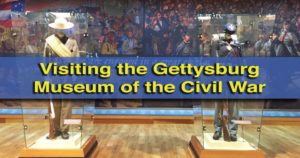 Every year, a million people visit Gettysburg, Pennsylvania, to learn about the events of July 1-3, 1863. When visiting the area around the battlefield, there are many museums that strive to tell the story of the battle in a variety of ways. However, if you only have the time to visit one, The Gettysburg Museum of the Civil War at the battlefield visitor center should be your choice.

I recently had a chance to visit the new museum for the first time. Having visited the old museum on several occasions as a child, I was impressed with the quality and size of the new museum, while glad that they kept several historic aspects, like the 120-year-old cyclorama.

Visiting the Gettysburg Museum of the Civil War is a great way to start any visit to the Gettysburg National Military Park. That’s because the museum offers a great overview of both the battle and its place in the Civil War, that will give you a great background knowledge once you have a chance to tour the battlefield itself.

Visits to the museum typically start with taking in a show at the Gettysburg Cyclorama and watching a film about the battle narrated by Morgan Freeman. The cyclorama 360-degree painting is the same one that was first displayed in Gettysburg in 1894. The 42-foot high painting depicts Pickett’s Charge on the final day of the battle. The use of mannequins in the foreground add an interesting element to the presentation. While there is no doubt that the cyclorama shows its age and lacks modern production values, the quality of the presented information still makes this a must-see attraction when visiting the museum.

The museum itself is located next to the Gettysburg Cyclorama and features over 20,000 square feet of space. The museum tells the whole story of the Civil War, with rather obviously, a heavy focus on the Battle of Gettysburg. While it might seem a bit surprising for the museum to focus on the entire war, it does a good job of putting the battle into context in regards to what happened before and after it.

What I found to be quite impressive were the high-quality artifacts on display, even though they don’t directly relate to Gettysburg. For example, the museum features items from John Brown’s raid on Harper’s Ferry, a precursor to the Civil War, and the stretcher that carried a mortally wounded Stonewall Jackson in Chancellorsville, Virginia.

As you pass through the museum, half a dozen short videos give fantastic information about the Civil War and the battle itself. These videos combined with authentic artifacts and excellent signage from the entire Civil War and, more specifically, the Battle of Gettysburg, provide an immersive environment that teaches a lot about the battle.

The museum also features information about the aftermath of the battle on the town of Gettysburg. This includes a section about both the residents of the town, along with the Gettysburg National Cemetery. Of course, you can’t have a museum about the battle without a bit of information about President Abraham Lincoln’s Gettysburg Address, as well. Those looking to learn more about the aftermath on the town would do well to visit the Shriver House, Jennie Wade House, and the nearby cemetery.

Without a doubt, I’d consider a visit to the Gettysburg Museum of the Civil War to be a must-visit introduction for those visiting the Gettysburg National Battlefield. After visiting the museum, visitors can leave the visitor center for a self-guided tour, or even better, take one of the battlefield’s fantastic guided tours, many of which leave from the visitor center.

And, while there are many other great museums throughout Gettysburg, if you only have time for one, make it the museum at the Gettysburg National Military Park Visitor Center.

Note: I was provided with complimentary admission to the Gettysburg Museum of the Civil War for the purposes of this review. However, the opinions expressed are my own.

Gettysburg Museum of the Civil War 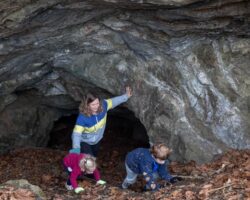 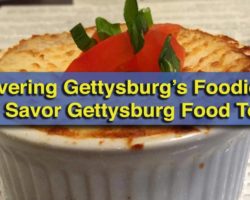