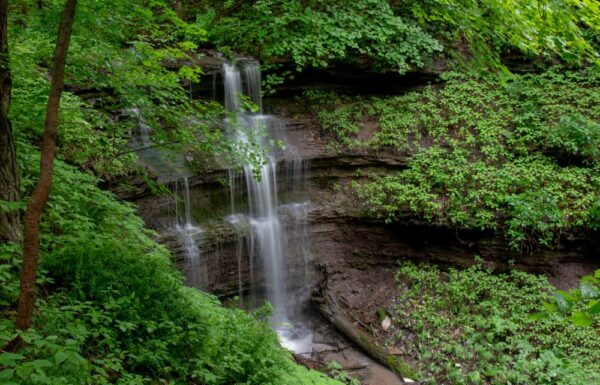 I’m always on the look for hidden waterfalls in PA, so when I found out there was a beautiful waterfall hidden in a local park near Pittsburgh, I knew I had to have a look.

Braddock’s Trail Park is located in North Huntingdon, PA, to the southeast of downtown Pittsburgh. The park occupies a spot of land located on a hillside overlooking the Youghiogheny River. The park is approximately 30-35 minutes from downtown Pittsburgh in Westmoreland County, though it’s less than a mile from the Allegheny County border.

While this small park is largely overlooked, it’s a fabulous spot to visit thanks to its waterfall, vista, and beautiful wildflowers.

The park also is part of history as its located on (or at least near) the trail General Edward Braddock cut into western Pennsylvania during the French and Indian War. Known as Braddock’s Road, it would end just to the west in present-day Braddock, PA after Braddock’s forces (which interestingly included both George Washington and Daniel Boone) were defeated by the French. (You can learn more about this battle at the nearby Braddock’s Battlefield History Center.)

While there is nothing at Braddock’s Trail Park to denote this history, it’s still a fantastic spot to visit, and the highlight, at least during times of high water, is Braddock’s Falls.

This 20-foot waterfall is located a short walk from the parking area and is quite beautiful. Unfortunately, the stream that the waterfall is on runs very low for much of the year, so, if you want to see this beautiful waterfall, you’ll want to make sure to visit the park after heavy rain or during the spring thaw.

During the spring, you’ll also get to enjoy the two dozen varieties of wildflowers that bloom in the park in April and May. The park map, which isn’t online but can be seen at the park, provides suggested areas of the park to visit to see different types of wildflowers.

If you want to visit Braddock’s Falls, the park’s Waterfall/Wildflower Trail runs directly adjacent to the waterfall, and there are great viewpoints both at the crest of the waterfall and from a short distance downstream. Sadly, there are no trails to the base of the falls, and the hillside is steep enough to make getting down tricky enough that I opted not to attempt it.

To reach the falls, you have two options.


From the parking area, you can return to the road and head past the gate to continue down the roadway. After about a tenth of a mile, the stream will cross under this road and the Waterfall/Wildflower Trail will head off to your right. Within a few feet, you’ll reach the top of the waterfall at Braddock’s Trail Park.

If you also want to explore some of the park and go for a hike, take the Eagle Trail, which leaves from the back of the parking lot behind and slightly to the left of the park sign.

This trail is relatively short but winds its way through a beautiful forest. In April and May, this trail, like much of the park, is covered in wildflowers. If you come during a period of high water, this trail can be rather muddy, but it’s still a nice hike.

When hiking the trail, you’ll pass a fork (stay to the left), as well as the stone foundation of an old building. There is no indication of what this building used to be, but it’s still neat to see it hidden in the woods.

Shortly after passing the stone foundations, the Eagle Trail will end at the Waterfall/Wildflower Trail near the top of the waterfall.

After you’ve had a chance to check out the waterfall in Braddock’s Trail Park, take some time to hike to the fantastic vista that overlooks the Youghiogheny River. To get there, head up the road from the waterfall towards the parking area.

About halfway back, you’ll see a trail enter the woods on the right side of the road (if hiking towards the parking lot). There is also a small, wooden bridge here that should help you find the trail. This is the Scenic Lookout Trail, and it runs from the road up to the top of the hillside.

While this trail is relatively short, it is a bit steep in spots. While no distance is given, I’d guess it’s somewhere between a third and half a mile to the vista from the road.

The vista offers a great view of the Youghiogheny River far below as it snakes its way towards the Monongahela River. While I’m sure the view is better when there are no leaves on the trees, it’s still a nice view in the summertime.

To return to your car from the vista, take the same trail back down that you came up the hill on or hike the Advanced Hiking Trail back to create a loop.

Overall, Braddock’s Trail Park is a fantastic spot to visit. Not only is Braddock’s Falls likely the second closest waterfall to downtown Pittsburgh (the closest being Fall Run Falls), it’s also a tranquil spot that includes several other neat highlights.

Getting to Braddock’s Trail Park

Braddock’s Trail Park is located in North Huntingdon in Westmoreland County, Pennsylvania. It is about 35 minutes from downtown Pittsburgh, making this an easy trip out of the city for those that love waterfalls and peaceful parks.

The parking area for the park is located at the end of Robbins Station Road at the following coordinates: 40.303377, -79.771872. Simply follow the road until it dead-ends into a gate and turn right into the dirt parking area.

In the parking area, make sure to take note of the information sign. There is a map here of the park, and since no other maps exist at the park or online, it’s a good idea to take a photo of this map to reference while you are hiking.

The park’s trails are also denoted with colors on the map, but there were no trail markers that I could find. This made the trails slightly difficult to navigate, but overall, with a bit of common sense and a copy of the map, it’s easy enough to find your way around the park.

Looking for more places to visit in the area? Check out Bushy Run Battlefield, Bells Mills Covered Bridge, and the best breweries in Pittsburgh.

See Map Below for More Nearby Places to Visit 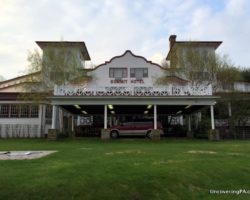