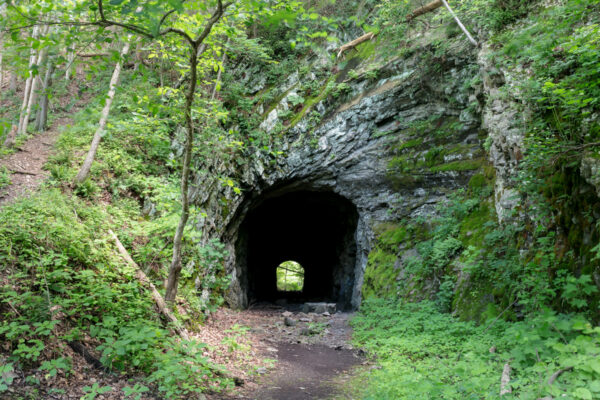 I’m always on the lookout for abandoned places in PA that I can explore, so I was excited with I discovered the Coburn Tunnel, an abandoned railroad tunnel in Centre County, PA.

The Coburn Tunnel is located at a very narrow horseshoe bend in Penn’s Creek a few miles from Coburn, PA on the northern edge of Bald Eagle State Forest. The tunnel is located just below the beautiful Penn’s View, which sits on the ridgeline above the tunnel, which you can see if you know what you’re looking for.

This tunnel, which is also known as the Beaver Dam Tunnel, was a part of the Lewisburg, Centre and Spruce Creek Railroad, and eventually, the Penn Central Railroad. It was in use until 1970 when the entire line was shuttered.

In this regard, it is like the nearby Poe Paddy Tunnel, which was built and abandoned at the same time by the same railroads.

However, unlike the Poe Paddy Tunnel, which has been refurbished for use as part of a rail trail, there has been little to no work done on this tunnel in the 50 years since the railroad abandoned it. That is part of its appeal, though.

How to Get to the Coburn Tunnel

The Coburn Tunnel is quite easy to access by driving down Tunnel Road, which closely follows Penn’s Creek from the community of Coburn. In fact, if you drive down the road, you can’t miss the tunnel as it appears directly in front of you as the road turns left to follow the waterway.

There is parking on either end of the tunnel with space to pull off of the road on the near side and more of a standard parking area on the far side at the end of Tunnel Road.

The near side of the tunnel can be found at the following coordinates: 40.849219, -77.453912. To reach the parking area at the far end, simply continue to follow the road for an additional half a mile until it ends.


Regardless of which end you check out the Coburn Tunnel from, there is a short path to reach the opening in the hillside. These openings are cut into solid stone and are quite impressive to look at. Interestingly, the near side of the tunnel has more of a rough exterior while the far side is covered in decorative stones.

It’s really amazing to think that these were carved out with just dynamite and hand tools and were big enough for entire trains to drive through.

The tunnel itself is about 100 yards long, and since it’s straight, you can see right through it. That being said, if you want to enter the tunnel, you’ll definitely want to bring some type of flashlight (preferably something strong than your cell phone), as there are tripping hazards and standing water within the tunnel.

It should be noted here that while there were no signs expressing any imminent danger or telling me to keep out when I visited, the large rocks laying on the ground within the tunnel testify to the fact that the structure is not fully stable. These have all obviously fallen in the 50 years since the tunnel has been abandoned, and it’s likely that other stones will fall in the future.

Enter at your own risk.

The interior of the tunnel has a dirt base and the tracks were removed many years ago. Shining a light on the walls and ceilings offers a glimpse into the craftsmanship here.

Whether you walk through the tunnel or drive around, it’s also worth spending a few minutes on the far side of the tunnel.

Here, you’ll find a narrow wooden bridge constructed on an old railroad bridge. The unique construction of this pedestrian bridge was fun to see.

On the far side of this bridge, the Penn’s Creek Trail runs for 2.5 miles along the banks of the waterway. Unfortunately, because of a missing bridge, there is no connection to another section of this same trail that runs through the aforementioned Poe Paddy Tunnel.

Hopefully, this connection will happen someday as this would definitely become one of PA’s best rail trails.

Overall, while the Coburn Tunnel isn’t among the must-visit spots in Pennsylvania, it’s a really fascinating spot, especially if you love abandoned places and railroading history.

And, while it’s a bit out of the way for a lot of other things, if you are spending some time exploring the Centre County portion of Bald Eagle State Forest, it’s definitely worth a quick detour for just about everyone.

Just make sure you use caution and enter it at your own risk.

Looking for more places to visit nearby? Check out the best breweries in Centre County, Poe Valley State Park, and Woodward Cave. 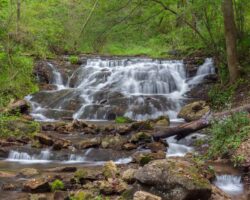