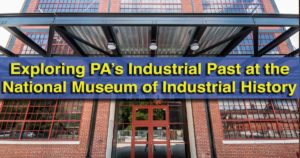 Pennsylvania has a rich industrial history. From the discovery of coal to the state’s vast forests and oil reserves, there have been many industries that impacted the state over the years. However, few of these industries are as synonymous with the state as the steel industry.

When you think of Pennsylvania’s steel industry, it’s likely that Pittsburgh is the first place to come to mind. However, on the opposite side of the state, steel was also a major industry. In fact, Bethlehem Steel, which was located in the Lehigh Valley, was, at one time, the country’s second-largest steel producer and the country’s largest shipbuilder.

While Bethlehem Steel closed their Bethlehem steel mill in 1995, it marked the end of an era in the city. However, over the years, parts of the former steel mill have come back to life with concerts, a historical walking path along the remaining blast furnaces, and now, a museum.

They say that good things come to those who wait, and in the case of the National Museum of Industrial History, that’s very true. I had the chance to tour this museum outside of normal hours just a few days after the museum opened and was very impressed.

To be perfectly honest, when I was going into the museum, I thought it might be a boring collection of artifacts. However, I was wrong. What I found when visiting the National Museum of Industrial History was a well thought out museum that covers industrial history in an interactive and fun way.

The most obvious aspect of the museum is its location. The National Museum of Industrial History is located inside of Bethlehem Steel’s electrical repair shop, which was constructed in 1913. Throughout the building, you can still see remnants of the equipment that was once housed in this imposing building in the Steel Stacks complex.

The museum is broken into four different sections, each focusing on a different aspect of industrial history that effected both Pennsylvania and the entire country.

The first section focuses on the 1876 Centennial International Exposition in Philadelphia. The first world’s fair held in the US, the exposition had a collection of specially-made industrial tools that showcased the best of what American industry had to offer.

After the exposition, many of the machines ended up in the Smithsonian, which has loaned several of them to the museum. These pieces are amazingly intricate and showcase some of the finest industrial art America has ever produced. Of course, in addition to being beautiful, these machines are functional and offer a great glimpse into 19th-century machinery.

Also in this section is a very large Carliss Pumping Engine that was used in York. This giant engine was responsible for pumping water for years, before finally being retired within the past few decades.

The hope is to get this unit running again at some point, so that, at least on special occasions, visitors can see this huge engine in working order.

The second portion of the National Museum of Industrial History covers the iron and steel industries. Given that the museum is located in the former Bethlehem steel plant, much of their focus in this section is on the company’s history.

One of the most interesting exhibits is the three models of Bethlehem Steel planets. These models were used for both trainings and to test changes to the factories. Today, they offer a great look at what these factories once looked like.

Other interesting exhibits related to Bethlehem Steel include an interactive map that shows visitors the global reach of the company, information about what life was like for factory workers, and the first piece of steel made in the Bethlehem steel mill.

The museum’s third section covers the silk industry, which while being little-known, employed more people in Bethlehem than the steel industry. However, while this industry was important to the Lehigh Valley, most of the museum’s artifacts come from New York.

The highlight in this section is the Jacquard Loom that was once part of the Scalamandre Silk Mill in Long Island City, New York. This particular loom was responsible for making all of the White House fabric from Presidents Herbert Hoover to Bill Clinton. There is even a piece of fabric on display that was made for John F. Kennedy.

The museum’s fourth and final section features information about the propane industry. Propane was discovered by Walter Snelling in 1910, and Snelling set out to sell this gas for home and commercial usage. In addition to information about the propane industry, the museum has several of Snelling’s personal effects, including his original sales kit, his lab equipment, and the first tank used to hold propane.

The propane section has my favorite aspect of the museum, their simulated hot air balloon ride. While firmly attached to the ground, the ride uses aerial video, moving floorboards, lights, and sound to do a nice job simulating a ride over industrial sites in the area.

This is just one of many great interactive elements that are scattered throughout the museum. Interactive exhibits include the ability to listen to industrial workers talk about their industries, a machine that tests how much horsepower you can generate, interactive maps, and much more.

These interactive elements move the National Museum of Industrial Museum from being simply a history museum into being a great learning environment that is sure to interest both adults and children.

Because of this, I was very impressed with the quality and attention to detail at the museum. If you are looking for something great to do in Bethlehem, PA, you won’t want to miss the National Museum of Industrial History.

Note: My visit to the National Museum of Industrial Museum was hosted by the facility. However, the opinions expressed are my own.

Looking for more places nearby? Check out the Moravian Historical Society Museum, the National Iron and Steel Heritage Museum, the Coplay Kilns, and Lost River Caverns.

See map below for other area attractions.
567 shares 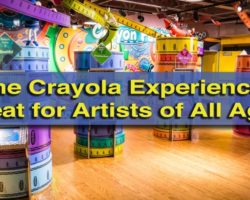 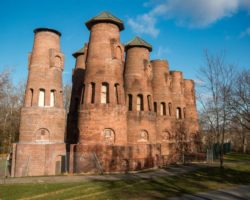 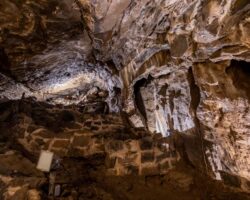