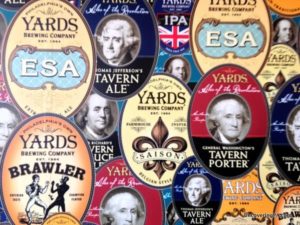 Note: Yards Brewery moved to a new location in Philly in November 2017. This article has been updated with the new location and operating hours, but some information may not be 100% accurate until we have a chance to visit.

It goes without saying that Philadelphia is a popular destination for those who want to learn more about the founding of America. Millions and millions of tourists line up each year to see great sites like the Liberty Bell and Independence Hall, and many visitors can make the claim that they experienced history when they visited Philadelphia.

But what if experiencing history with your eyes isn’t enough? What if you want to taste history?

Philly’s got you covered.

Located on a busy street in the Northern Liberties neighborhood of Philadelphia lies a seemingly regular warehouse.  The former site of a skate park, the red brick building wouldn’t deserve a second glance, except for one distinguishing feature: the large black sign that reads “Yards Brewing Company”.

However, there is one remarkable feature that sets Yards apart from any other brewery I’ve visited: Tom Kehoe.

The first thing that struck me when I met Kehoe was his effervescent smile. Grinning from ear to ear, his receding red hair and boyish charm instantly made me feel welcome in his workshop. However, unlike most craftsmen, Kehoe doesn’t carve statues out of wood or weld together metal, he makes beer.

And don’t be mistaken, Kehoe crafts his beer with the same pride a parent might take in their child succeeding in sports, dance, or school. While he may have started brewing beer to save money in college, Kehoe has become very proud of his creation. It’s no exaggeration to say that I’ve never met anyone more passionate or excited about their work than Kehoe is about his beer.

It’s this passion that has allowed Yards Brewery to grow from a beer source for two college boys into a successful craft brewery selling beer throughout the Mid-Atlantic.

What makes Yards Brewery a great stop of visitors, though, is its Ales of the Revolution. Based on the original beer recipes that George Washington, Thomas Jefferson, and Benjamin Franklin personally brewed, the beers give you a chance to experience the Founding Fathers in a whole new way.

However, Yards doesn’t just specialize is replicating others’ recipes.

Brewing everything from a light tasting Brawler ASB and their award-winning Philadelphia Pale Ale to my personal favorite, the English Special Ale, Yards has something for every beer lovers’ taste buds.

Without a doubt, if you want to experience history when in Philadelphia, there’s no better place to do it than Yards Brewery. The combination of history and passion makes some pretty great beer.

Yards Brewery is located on Spring Garden Street less than a mile from Independence Hall.

*Note – Due to public health concerns, tours have been suspended until further notice

For more information on visiting Yards Brewery, head over to their website.

Looking for even more places to drink in Philly? Check out the best Philadelphia breweries, our favorite beer gardens in the city, and some of the best breweries in Bucks County. 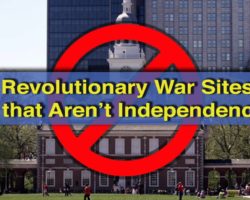