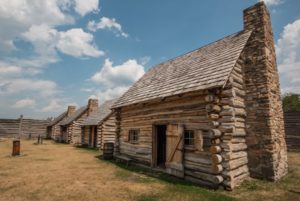 Pennsylvania is home to many well-known battlefields, encampments, and forts like Valley Forge, the Gettysburg Battlefield, and Washington’s Crossing. However, there are also many military history sites that are known to only a few. Fort Roberdeau in Blair County, PA, is one of these sites.

Fort Roberdeau was built in 1778 near present-day Altoona by General Daniel Roberdeau to protect lead mines that he set up in the area from the Torries and Native Americans loyal to the British. The lead mines supplied the raw materials for ammunition that the fledging Continental Army needed. Roberdeau, who served in the Continental Congress and would later sign the Articles of Confederation, built the fort at his own expense to protect this infrastructure.

In the end, troops were stationed at the fort for two years, leaving in 1780. In that time, no attacks were ever recorded on Fort Roberdeau. After the army left, the fort remained, so that settlers in the area could use it as protection in the event of any future attacks.

At some point after 1780, Fort Roberdeau was torn down and replaced with crop fields, and much of the fort’s history was forgotten by the surrounding community. However, the fort wasn’t entirely forgotten, and the idea of rebuilding it was proposed in the 1930s. Ultimately, it would take the country’s bicentennial in 1976 for Fort Roberdeau to rise again.

Today, forty years after its reconstruction, the fort (and the nearby Tytoona Cave) continues to draw visitors to this rural area to learn about life on the frontier and the role the army played in protecting the country’s natural resources during the Revolutionary War. If you love history, it’s definitely one of the best things to do near Altoona.

Visits to Fort Roberdeau begin in a restored barn that was built in 1859.

In addition to being the starting point for tours of the fort, there is also a small museum that does a nice job giving an overview of the fort and what life was like in the area during the Revolutionary War. One of the most interesting pieces in the museum is the topographic map that shows Indian paths, forts, and settlements in the region during the 18th century.

This offers a great look at what the area looked like more than 200 years ago.

Guides, some in period costumes, take visitors through the recreated Fort Roberdeau. Over the 40 years since the fort was reconstructed, much has been learned about how the fort was constructed, and the fort is slowly but surely being made more authentic.

Guided tours offer information on the history of the fort, why it was built, and what life was like for those that lived there. One interesting tidbit that I picked up was that Fort Roberdeau’s walls were built with horizontal logs instead of vertical logs because the rocky soil didn’t allow logs to be dug deep into the ground.

Inside the fort, there are a handful of buildings in the fort that show different aspects of life. The log buildings were used to house the soldiers that lived in the fort. Each building shows a different class of soldier, giving a great look at how life differed for soldiers depending on their rank.

Other structures on site show workshops such as a blacksmith shop and a lead smelter that would have processed the lead mined nearby.

The land around Fort Roberdeau is a 230-acre park that is open to the public throughout the year.

While admittance to the fort is only by guided tour, visitors can walk through the park and follow the short nature hike through the woods without paying an admission cost. One highlight of this walk is a small sinkhole, one of many in Sinking Valley.

Fort Roberdeau might not be the most well-known or authentically recreated military history site in Pennsylvania. However, for those wanting to learn more about life on the Pennsylvania frontier and how it was affected by the Revolutionary War, there are few better sites in the state than Blair County’s Fort Roberdeau.

Note: My visit to Fort Roberdeau was hosted by the site. However, the opinions expressed are my own.

See map below for other area attractions.
11.1K shares 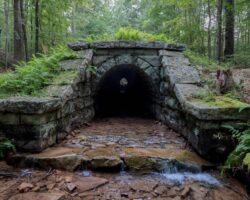 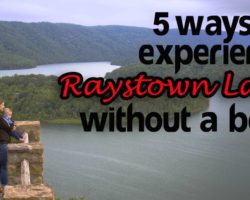 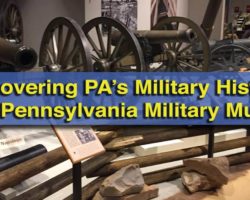