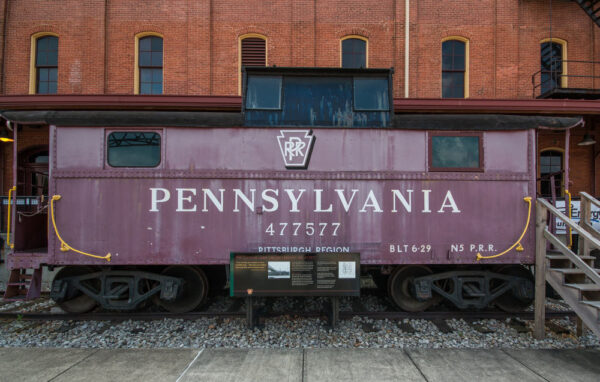 Disclosure: This article may contain affiliate links. We will make a small commission from these links if you order something at no additional cost to you.
Located in the heart of Pennsylvania’s Alleghenies region, Altoona is a fantastic destination for travelers that love history and natural beauty. During my travels to the region, I’ve found many fantastic things to do in Altoona and the surrounding Blair County.

Located west of downtown Altoona, the Horseshoe Curve is one of the most important spots in U.S. transportation history and one of the wonders of PA.

That’s because the creation of the Horseshoe Curve allowed trains to cross the Allegheny Mountains, cutting travel time from Philadelphia to Pittsburgh from several days to less than 20 hours. This improved transportation spurred western development in the state and the country.

Today, the Horseshoe Curve is still used by freight trains, as well as one Amtrak train in each direction per day. Those wanting to see this site and learn more about its history and impact can visit the seasonal visitor center and viewing platform.

The Curve is just one of the many great spots in the Altoona area to view trains.

Located in Hollidaysburg, the seat of Blair County, is Chimney Rocks Park. This park is home to unique chimney-like stone pillars and dramatic cliffs. From the edge of these cliffs, there are fantastic views of downtown Hollidaysburg.

Visitors to this park can take the short and easy walk to one of the overlooks, or they can tackle the somewhat challenging 0.7-mile hike to several other great viewpoints.

Baker Mansion is the home of the Blair County Historical Society Museum. If you want to learn about the history of the region, this is a must-visit destination.

Throughout the museum, both static and interactive displays are set up to showcase the history of Blair County, how its residents lived, and what effect the county and those living in it had on the region and the world.

Tytoona Cave is located northeast of Altoona and is one of the most unique caverns in Pennsylvania. That’s because this is a spot that you can explore on your own at no cost.

Tytoona Cave is entered through a sinkhole and there is said to be 1,000 feet of passageway that can be explored here before the cavern ends at a sump. Along the way, you’ll follow an underground stream that flows through large rooms carved from the limestone.

Make sure to bring at least two strong flashlights through so that you can see inside this underground world.

Did you know that there is a style of pizza native to Altoona? Known as Altoona-Style Pizza or Altoona Hotel Pizza, this pizza originated in the Altoona Hotel, but has spread to other pizza restaurants around the city since the hotel burned down.

While the style is a bit controversial, with some even declaring it to be “not pizza,” it’s an interesting food to try at least once.

There are several places to get it in Altoona, including 29th Street Pizza, Subs, and More.

Located in northern Blair County, DelGrosso’s Park is definitely one of the best things to do near Altoona, PA. This free-admission park allows visitors to pay as they go for the attractions they want to ride (an all-day pass is also available).

DelGrosso’s features many great rides and is a fun spot for the whole family during the summer season.

In addition to the amusement park, DelGrosso’s is also home to Laguna Splash, a waterpark that was completely revamped in recent years.

Altoona used to be a hub of railroading activity, and the Railroaders Memorial Museum showcases the history of this industry in the region.

The museum covers everything from the formation of the railroad in the region to what life was like for locals that worked in the industry using a mix of artifacts and dioramas. There are also several historic railcars on site.

While this waterfall isn’t large, it’s worth the short trip to see it if you find yourself in town. That being said, while it’s an easy hike to reach, there is no signage indicating where the waterfall is, so make sure you have good directions, like the ones linked in the last paragraph, when you visit.

Canoe Creek State Park is a beautiful spot in eastern Blair County. Nearly 1,000 acres in size, the park is dominated by Canoe Lake, a large man-made lake the is popular with boaters and fishermen.

The area around the park was once home to several limestone mines and kilns, and the remnants can still be seen today along Canoe Creek’s fantastic Limestone Trail. This trail passes by abandoned limestone kilns, through an old quarry, and near the edge of the lake.

There are some fantastic craft breweries in Altoona and Blair County, and adding one or two to your list is a great way to keep exploring the region even while you’re taking a rest.

There are three breweries in downtown Altoona, including Railroad City Brewing Company, and there are also breweries in Roaring Spring, Duncansville, and Hollidaysburg. This means that no matter where you are in the county, you are sure to find some great craft beer nearby.

If you love art, don’t miss the Southern Alleghenies Museum of Art in downtown Altoona. This museum is one of five connected art museums scattered around the region and features some of the best local art, as well as art by renowned national and international artists.

Fort Roberdeau is a recreated fort from the Revolutionary War that’s located in a rural corner of Blair County. The fort was originally built to protect settlers on the frontier from attacks by the British army and their Native American supporters, though it never saw an attack.

The fort was dismantled centuries ago, but the rebuilt Fort Roberdeau offers a fantastic look into what life was like in the region during the mid-18th century.

If you love history, a drive out to the fort is one of the best things to do in Blair County, PA.

Canal Basin Park is a small park in Hollidaysburg that offers both outdoor fun as well as a chance to learn more about the region’s history.

The park is located along a portion of the Pennsylvania Canal and the Allegheny Portage Railroad. Visitors can see recreations of the locks that once existed here and signage that offers information about the canal’s impact on Hollidaysburg.

In addition to this history, the park is home to an amphitheater and a fun playground for kids designed to look like a canal boat.

The Altoona Curve are the Double-A affiliates of the Pittsburgh Pirates and play their home games at Altoona’s Peoples Natural Gas Field.

Without a doubt, this is one of the best minor league stadiums I’ve visited in the country and watching a game here is one of the most fun things to do in Altoona during the summertime.

Just beyond the stadium’s fence is one of the most unusual backdrops in all of baseball: a rollercoaster.

Lakemont Park sits directly next to Peoples Natural Gas Field, and it’s their Skyliner rollercoaster that can be seen whizzing by from inside the stadium.

Lakemont Park is most notable for Leap-the-Dips, the oldest still-running rollercoaster in the world, dating back to 1902, but also has several other fun rides including a second rollercoaster, a waterpark, and more than a dozen other rides.

If you love chocolate, you won’t want to miss Gardners Candies in Tyrone. While they have multiple shops throughout central and western Pennsylvania, this is their flagship store, and it’s located only a short distance from the factory.

At the store, you can purchase a variety of both individual and pre-packaged chocolates for yourself or as a gift. Don’t miss their Peanut Butter Meltaways, which are some of my favorite chocolates I’ve had in PA.

While many excursion railroads in Pennsylvania use electric or diesel engines, Everett Railroad Company primarily uses a 1920 steam engine on most of its trips.

The charming borough of Roaring Spring is a great spot to spend a bit of time exploring.

The heart of the borough is located around a small man-made lake created by Roaring Spring. This spring has been bottled for many decades, and you can buy bottles of local water or you can use one of the taps next to the lake to get some of the water for free (which many were doing when I visited).

Just outside of this area of town is a small waterfall that’s also worth seeing out.

Do you have a favorite thing to do in Altoona or Blair County, PA, that we didn’t mention? Let us know in the comments below.

See our map below for other great nearby destinations 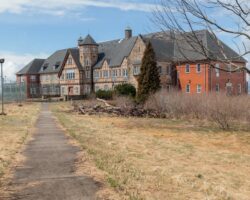 13 thoughts on “18 of the Best Things to Do in Altoona, PA (and the Rest of Blair County)”