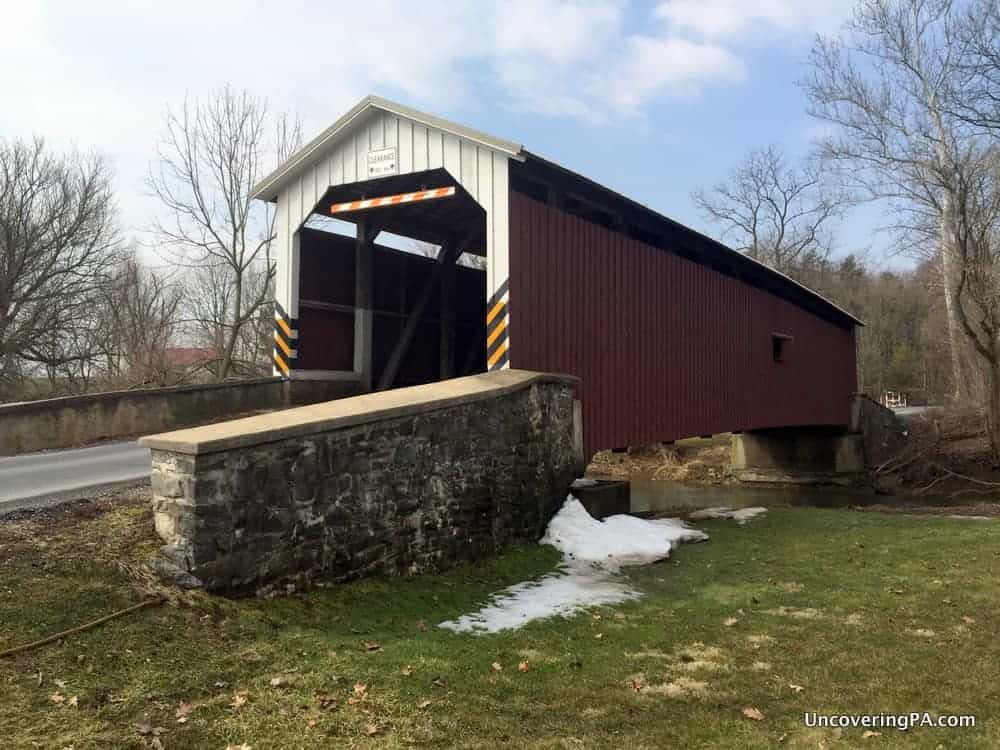 2.7Kshares
Disclosure: This article may contain affiliate links. We will make a small commission from these links if you order something at no additional cost to you.

Lancaster County, Pennsylvania, is home to 29 covered bridges, the most of any county in the state and even more than all but a handful of states. Since there are too many bridges to cover in a single article, I’m breaking them down into a series of articles that will appear on the site from time to time.

To start, I’m covering the four bridges in southwestern Lancaster County. For even more covered bridges in the county, check out my articles on the northwestern bridges and the northeastern bridges.

These four covered bridges stretch from Strasburg in the northeast to Pequea in the southwest. All four bridges cross Pequea Creek as it makes its way to the Susquehanna River.

The four Lancaster County covered bridges below are listed with the closest to downtown Lancaster being first, which coincidently is also east to west and north to south. Should you rather, these bridges can be done just as easily opposite the order listed below.

[If you need help using the coordinates listed below, read my explanation here.]

Neff’s Mill Covered Bridge is located just outside of Strasburg, home to several popular railroad destinations. The bridge spans 102 feet over Pequea Creek and is only 15-feet wide. A bridge was built in this location in 1824 and called Bowman’s Mill Covered Bridge. The current bridge dates from 1874 when the original bridge was rebuilt.

The bridge is set in a very picturesque valley. Next to the bridge is a white picket fence that is home to a few very friendly horses. Opposite the horses is an open field with no property markings, making this the best area for photographs.

Getting There: Neff’s Mill Covered Bridge is located about 15 minutes from downtown Lancaster and close to the borough of Strasburg. The bridge can be found at the following coordinates: 39.978615, -76.225828.

There isn’t really a good area to pull off the road and park, but if you are careful, there are a few places where you can get your car mostly off of the road. During my visit, the best area to park seemed to be opposite the white fence on the bridge’s western bank.

Lime Valley Covered Bridge sits in a very scenic low valley near Willow Street, Pennsylvania. Despite not being in Strasburg and being further from the borough than Heff’s Mill Covered Bridge, this bridge is also known as Strasburg Covered Bridge.

The bridge is located about halfway between downtown Lancaster and Quarryville, just off of Route 222, a major north-south road in the area.

It spans 103 feet over Pequea Creek and was built in 1871 by either Elias McMellan or Joseph Cramer.

The wide valley that this bridge is located in offers several great angles for photography. However, in my opinion, the best is from a hundred yards away along Lime Valley Road, which runs perpendicular to the bridge.

As long as there aren’t a lot of other visitors, parking for this bridge is quite easy to figure out as there is ample space to pull off the road. However, the best area seems to be along the southwestern side of Brenneman Road.

Baumgardener’s Covered Bridge in Pequea is the next covered bridge that you’ll come to on your journey through Lancaster County’s covered bridges.

Like the other bridges listed here, it crosses the Pequea Creek. Baumgardener’s Covered Bridge was built in 1860 by Davis Kitch and is 120-feet long. The bridge you see today is actually longer and taller than it was when it was originally built.

After being damaged in a flood in 1986, the bridge was rebuilt the following year. However, to help prevent future damage, the bridge was raised four feet, which necessitated lengthening it by nine feet to compensate for the extra height.

The valley where Baumgardener’s Covered Bridge is located is very forested, making photos of the bridge a bit difficult to obtain. However, there is a large field on the northern side of the bridge that isn’t posted as being private property.

While there, make sure to check out the very cool, old barn just a few hundred yards away from the bridge on the northern side.

Parking at the bridge is along pull-offs next to the road. Make sure you pull your car far enough off of the road to avoid traffic. The best parking area is on the northern side of the bridge (the side you approach from if coming from downtown Lancaster or Lime Valley Covered Bridge).

It crosses the Pequea Creek over a wide, fairly deep gorge. At 170-feet long, this is the second longest bridge in Lancaster County. The peaceful setting and surrounding woods make this a perfect setting for a beautiful covered bridge.

Colemanville Covered Bridge was built in 1856 by James C. Carpenter. It was rebuilt in 1938 and in 1973 after heavy flooding. In 1992, the bridge was completely rebuilt and moved a few feet to help prevent future flood damage.

I like this bridge because it reminds me a lot of one of my favorite covered bridges, Forksville Covered Bridge in Sullivan County, PA. I’m not entirely sure why it does, but that was the first thought I had when I saw it, and I couldn’t get that comparison out of my head during my visit.

Colemanville Covered Bridge is located next to State Game Lands 288. Along the southern bank for the river is the 1.3 mile Trolley Trail that runs through the game lands between the covered bridge and the small town of Martic Forge.

This trail follows an old trolley line that used to run from Lancaster to Pequea and looks like it would be a very beautiful walk along the creek.

Getting There: Colemanville Covered Bridge is located just a few miles from where the Pequea River empties into the Susquehanna River in southwestern Lancaster County and close to Shenks Ferry Wildflower Preserve.

It is about 25 minutes south of downtown Lancaster and only five minutes east of Pequea, Pennsylvania. It sits about 10 minutes southwest of Baumgardener’s Covered Bridge at the following coordinates: 39.898932, -76.342164.

Parking at this bridge is a little tricky, and I’m not exactly sure where to park. There is a nice large area next to the bridge and the game lands that seems like a perfect area for parking, but the area is covered with no parking signs.

When I visited, I pulled my car into this area since it was off the road and just made sure to stay close to my car. However, I can’t guarantee a passing police officer or game warden might not give you a ticket. It really is a shame that I couldn’t park here, as I would have enjoyed checking out the Trolley Trail.

Want to see even more covered bridges in Pennsylvania? Check out our Pennsylvania Covered Bridges archives! 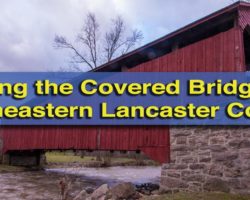 2 thoughts on “Visiting the Covered Bridges of Lancaster County, Pennsylvania: The Southwestern Bridges”