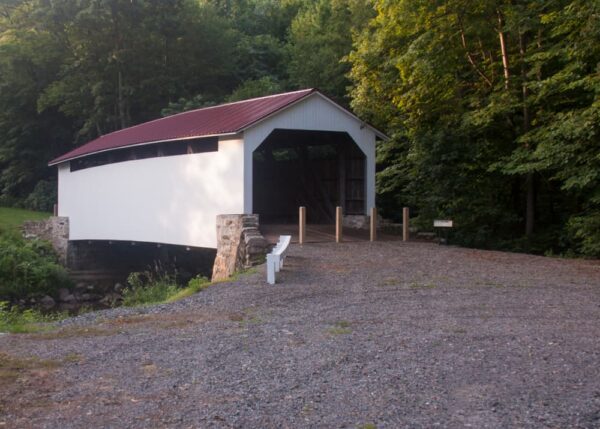 Dauphin County, Pennsylvania, features two of the most visited destinations in the state: Hershey and Harrisburg. However, few know about the two beautiful and historic covered bridges near Harrisburg.

While you can no longer drive across either bridge, they are both worth taking the time to see. One is located next to a great historical destination; while visiting the other will allow you to see the beauty of the little-visited northern reaches of Dauphin County.

Make sure to take some time to visit these two great Pennsylvania covered bridges near Harrisburg the next time you are looking for something interesting to do in the area.

Everhart Covered Bridge is the closest covered bridge to Harrisburg. The bridge is one of several historic structures located on the grounds of Fort Hunter Park, a 10-15 minute drive from the Pennsylvania Capitol, and one of the best spots to enjoy the outdoors near Harrisburg.

Everhart Covered Bridge was originally located in Perry County’s Oliver Township on the other side of the Susquehanna River. It was built over the Little Buffalo Creek in 1881 near Newport and the present site of Little Buffalo State Park. It is 36 feet long and utilizes a multiple King truss system.

Everhart Covered Bridge was slated for demolition and replacement in the early 1940s but was purchased by Fort Hunter Mansion to save it. The bridge sat on the grounds for many years. However, with the bridge quickly deteriorating, it was dismantled and put into storage in 1980.

Finally, after years of waiting, the bridge was rebuilt on the grounds of Fort Hunter Park in 2006.

Today, visitors can walk through this historic covered bridge while exploring a beautiful park along the banks of the Susquehanna River.

Getting There: Everhart Covered Bridge is located near Fort Hunter Mansion about seven miles north of downtown Harrisburg. The bridge can be found at the following coordinates: 40.343187, -76.907753.

Parking for the bridge is located directly adjacent in a large parking lot that also serves as parking for the other historical sites in the park. It is also near the beautiful Fort Hunter Conservancy.

The Henninger Farm Covered Bridge is located in northern Dauphin County, a few miles north of Route 209 between Lykens and Elizabethville. In contrast to the southern reaches of Dauphin County, this area is quite rural with more farmland and forests than communities.

Henninger Farm Covered Bridge, also known as the Stroup Covered Bridge, was built in 1850. It spans the Wisconisco Creek and is 72 feet in length. Unlike most covered bridges in the area, it is painted white.

Henninger Farm Covered Bridge is located adjacent to the roadway, having been bypassed by a new bridge as traffic increased. While you can no longer drive across the bridge, visitors are still able to walk across this historic structure.

There is a large dirt parking area on the northern side of the bridge that provides great access for those wanting to visit this beautiful Dauphin County covered bridge. 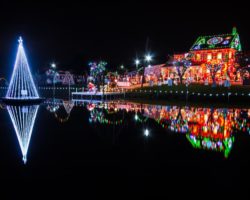