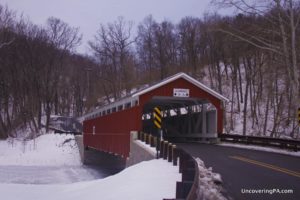 On my way to Bucks County for a recent visit, I decided to spend a few hours and check the six covered bridges in Lehigh County, Pennsylvania.

Since I haven’t spent much time in the Lehigh Valley, I wasn’t sure what to expect from my visit. However, I was excited to discover that these six bridges are some of the most scenic and easiest to visit covered bridges that I’ve had the chance to visit in Pennsylvania.

Traveling between Harrisburg and Doylestown, I visited these six bridges in a north to south direction, which is the order they are listed in below.

It’s worth noting that traveling south to north is just as simple and, if you are following the guide provided by the local visitor bureau, Discover Lehigh Valley, the way they recommend doing the tour. (This is because they end their tour with the one remaining covered bridge in Northampton County, which I did not have a chance to visit on this trip.)

The six covered bridges in Lehigh County are all located in close proximity to Allentown. In fact, Bogert’s Covered Bridge (the last one listed here) sits just four miles from Center Square in downtown Allentown, making the city a great stop after touring the bridges.

Despite being close to the city, all of the bridges are in beautifully manicured areas, with several feeling quite rural. Also interesting is that five of the six bridges cross over a roughly 8-mile long section of Jordan Creek.

One other thing that I appreciated about each of the bridges in Lehigh County was how easy it was to find parking, at least for a single car. Even with the recent snow, there was either a parking lot or roadside area that had been plowed, making sure that I had no issue finding parking.

Built in 1882 and 108 feet long, Schlicher’s Covered Bridge is the newest and shortest covered bridge in Leigh County. That one statement should tell you a lot about how great the covered bridges of Lehigh County are, but it certainly doesn’t take anything away from the beauty of this bridge.


Located in the Trexler Nature Preserve, this bridge is in a very pristine area surrounded by forested hiking trails. If you’re looking to spend a bit more time in the area, the preserve has 26 miles of hiking trails, though it’s best to park your car in one of the parking lots than on the side of the road next to the bridge.

Next to Schlicher’s Covered Bridge, there’s a beautiful red barn on Jordan Creek’s southern bank. This building is actually located on the outskirts of the Lehigh Valley Zoo which puts on the fantastic Winter Light Spectacular during the holiday season and is located within the grounds of the preserve.

Schlicher’s Covered Bridge was completely rebuilt in 1995, so it is in excellent shape and, at least during the winter, was in one of the more scenic areas I’ve come across for a covered bridge in Pennsylvania.

Loops are roughly 1.5 miles for each trail, or you can double back once you reach the bridges to slightly shorten each hike.

Geiger’s Covered Bridge is noticeably different from other covered bridges. While the roofline remains the same, the entrances to the bridge have notches that almost look like wings. I can’t find any information on the reason for this, but it does give the bridge a very unique look as you approach it.

Geiger’s Covered Bridge is located at the follow coordinates: 40.646786, -75.623031. The small parking area here is a good jumping off point to do the 2.7-mile easy hiking loop that runs along Jordan Creek to Schlicher’s Covered Bridge and back.

A few miles downstream from the two covered bridges in Trexler Nature Preserve is Rex’s Covered Bridge. Crossing 116 feet over Jordan Creek, this bridge is quite beautiful and was built in 1858.

Unlike the other five covered bridges in Lehigh County, Rex’s Covered Bridge is not located in a park, and is, unfortunately, surrounded by private property. This makes getting a good view of the bridge rather challenging, but there is still enough of a view to make visiting worthwhile.

Of all the covered bridges in Lehigh County, Pennsylvania, Wehr’s Covered Bridge might be in the most scenic setting. Located at the western end of Covered Bridge Park, this 128-foot long bridge crosses over Jordan Creek just downstream of a small dam, which provides a very scenic man-made waterfall along the creek.

The park around the bridge is a great place to walk around and even has some picnic tables and a grill or two if you want to bring snacks or a meal for your trip. I especially enjoyed the scenic stone walls along the creek just downstream of the bridge.

Located about a mile downstream from Wehr’s Covered Bridge is Manasses Guth Covered Bridge. This bridge spans 108 feet over Jordan Creek. This is the last of the five covered bridges along this waterway before it flows into the Lehigh River in Allentown. A bridge was originally built in this location in 1858, but the bridge you see today dates from 1882 after the original had to be replaced after burning down.

This bridge is also located in Covered Bridge Park, but at the park’s eastern end.

The bridge was named for Manasses Guth, who lived in the stone house that is still standing next to the bridge. Just downstream from the bridge there appears to be a lime kiln, but the snow and unknown property lines kept me from investigating.

Unlike most of the other covered bridges in Lehigh County, Manasses Guth Covered Bridge looks somewhat in need of being repainted. However, the flaking paint gives the bridge a bit of character that is sometimes lacking from bridges with more pristine paint jobs.

Bogert’s Covered Bridge is notable among the other covered bridges of Lehigh County for several reasons. First, it crosses Little Lehigh Creek, making it the only bridge that doesn’t cross Jordan Creek. It is also the only one that isn’t open to cars. Lastly, it’s the longest of the bridges at 145 feet.

Built in 1841, the same year as Wehr’s Covered Bridge, Bogert’s Covered Bridge is among the oldest in the state. Interestingly, it was originally built without a single nail or piece of iron, something that is quite rare among surviving covered bridges in Pennsylvania.

Since being damaged in 1956, the bridge is no longer in use and is tucked away next to a very busy four-lane road. On the cold Sunday morning in February that I visited, I had all the other bridges to myself. However, at Bogert’s Covered Bridge, the park around the bridge was quite busy because of the many nice trails in the area.

Looking for more things to do in Lehigh County? Check out the Allentown Art Museum, the Liberty Bell Museum, and the Coplay Kilns.

[Need help using the coordinates in this guide? Click here for information.] 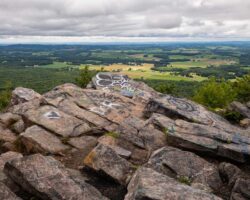 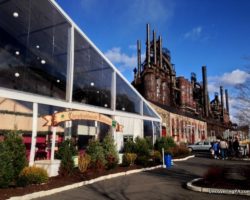 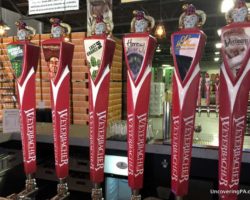 3 thoughts on “Visiting the Covered Bridges of Lehigh County, Pennsylvania”