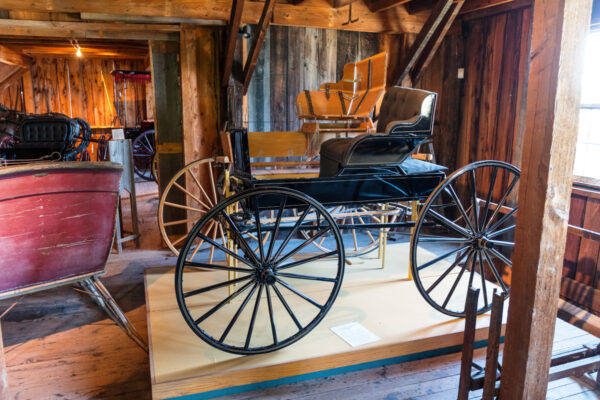 If you’ve spent any amount of time driving across PA, you’ve undoubtedly seen a buggy rolling down the road in some of the rural parts of the state thanks to the Amish and Old-Order Mennonites that live here. Because of that, it probably won’t come as a surprise that PA has an entire museum dedicated to buggies.

The Mifflinburg Buggy Museum is located in Mifflinburg in Union County, PA. While this spot isn’t overly close to some of the more common areas to see buggies today, such as Lancaster County, Mifflinburg was once known as “Buggy Town USA” because it was home to more than 50 buggy and sleigh makers in the late 19th century.

The Mifflinburg Buggy Museum occupies five different buildings on the southwestern end of town: four historic structures and a modern one that serves as the museum and visitor center.

The museum is centered around the workshop for William A. Heiss’ buggy factory, which was used from 1883-1920. While this was far from the largest buggy factory in town, it is nearly perfectly preserved, which makes it an incredible spot to visit.

To be honest, while I’ve known about this museum for many years, it was never high on my list of spots to visit simply because I thought it was going to simply be a collection of antique buggies. And, while they do have some outstanding examples of historic buggies, this spot also features a nearly perfectly intact factory, which I personally found fascinating to see.

The museum in the visitor center features an introductory video, as well as a lot of signage that tells a little bit about both this factory and Mifflinburg in general. There are also some antique tools and a beautifully-restored buggy on display.

The guided tour at the Mifflinburg Buggy Museum lasts about an hour and visits the other four buildings on the property.

On my tour, we started in the historic Heiss Coachmaker Workshop. When Heiss died in 1931, the doors to the building were locked, and it was left nearly undisturbed for 50 years, creating a time capsule of what a buggy factory was like 100 years ago. In that regard, it reminded me of the W.A. Young and Son’s Machine Shop in Greene County, PA, which has a very similar story.

Since the museum opened, stabilization efforts have taken place to secure the foundation, and some of the heavier elements have been removed, but what you see today is very similar to how things looked when this was an operating factory. There are even parts still in bins left over from when the factory closed.

There are two floors to see here, with the space evenly divided between the historic factory and antique buggy display area. The guides do a nice job explaining the various areas of the factory, what they were used for, and what tools remain today.

The buggies on display here range from being beautifully restored to some in pretty rough shape. It was interesting to see this variety, and it gave me a real appreciation for the work that goes into restoring them.

Even more interestingly, some of the buggies on display in the museum were made in this very factory, while some of the others were made locally in other factories around Mifflinburg.

The second space that the tour visits is the former showroom. It was here that prospective customers would come and see the options for the buggies built in the workshop across the street.

In this space, you’ll find many more incredible examples of historic buggies and sleighs, as well as some artifacts from Mifflinburg’s rich buggy-making industry. There are also a few antique automobiles on display here that were produced in the area.

While I was at first confused by the presence of the cars, it was explained to me that as cars began to replace buggies, many of the factories in town switched to automobile assembly (like some of the buildings now used by the nearby Rusty Rail Brewing), or, in the case of Heiss, painting and modifying automobiles.

The final building on the tour is the Heiss family home, which was located directly adjacent to the factory.

This home is set up much as it would have looked when William Heiss and his family lived here in the late 19th and early 20th centuries. It’s interesting to walk through the home and get a glimpse of what life was like in this area during that time period.

Overall, I really found the Mifflinburg Buggy Museum to be quite fascinating. For me, the historic factory was the most interesting part as it reminded me of many of the amazing abandoned places I’ve visited in PA. However, others may find more enjoyment in the antique buggies, sleighs, and automobiles on display.

No matter your interest, though, if you love history, this is definitely a neat museum to check out.

Looking for more places to visit nearby? Check out T&D’s Cats of the World, Hassenplug Covered Bridge, and Woodward Cave. 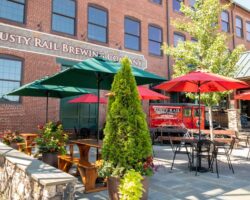